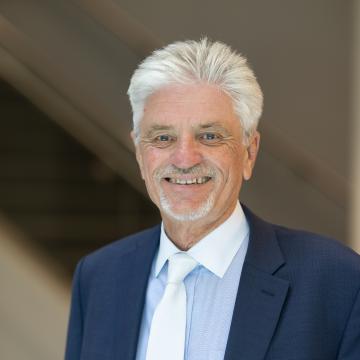 After volunteering and speaking on behalf of MBKU for eleven years, Wayne Heidle joined the MBKU family in July, 2015 as the Director of Community Relations and Assistant Professor. His main focus is attending community outreach events and speaking on behalf of the university, the individual colleges, community programs and special events. Other duties include Curator of Art for the Sharing Visions Art Exhibit, management of the Kathryn T. McCarty Adaptive Technology Center and providing business-related support for the new Ketchum Health center in Anaheim.

For MBKU, Wayne served as Vice President of Foundation for the Preservation of Sight, Chairman of the Low Vision Council and is currently a member of the University Advancement Campaign Cabinet. He also serves on the 2015 Gala Steering Committee.

Throughout the years, Wayne has been honored with many awards, most recently the Humanitarian V-Award at the 2014 MBKU Gala and in that same year was chosen as an Orange County Register “Everyday Hero,” honored at the OC Register Gala in February 2015.