Our Founder:Marshall B. Ketchum, MD 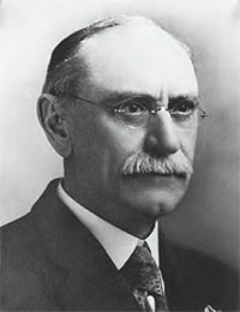 Dr. Ketchum was born in Canada in 1856 and became a pharmacist after many years of study. Dr. Ketchum wanted to further his education, so he traveled to the United States to study medicine at the Eclectic Medical Institute in Cincinnati, Ohio. He graduated with a medical degree in 1882. Later, Dr. Ketchum became a faculty member at Nebraska’s Lincoln Medical College, eventually transitioning to conducting the Lincoln Optical College from 1896-1903. After his time at the Lincoln Optical College, Dr. Ketchum moved to Los Angeles and started the Los Angeles School of Ophthalmology and Optometry in March of 1904. This was an exciting time for the profession of optometry, as it was just beginning to develop into a distinct profession separate from general medicine. For many years, Dr. Ketchum worked tirelessly to develop the program and merge several schools into the college, which became non-profit in 1938. Dr. Ketchum served as president of the college until 1920.

Timeline of the Life of Our Founder

1852 - The American Pharmaceutical Association is founded.

1898 - The American Optometric Association is founded.

1903 - California’s governor signs the first law in the state of California recognizing and regulating the practice of optometry.

1904 - Marshall B. Ketchum, MD, opens the Los Angeles School of Ophthalmology and Optometry in the Lankershim Building.

1909 - The school is renamed the Los Angeles College of Optometry and Ophthalmology.

1911 - The school is renamed the Los Angeles Medical School of Ophthalmology and Optometry.

1922 - The school is renamed the Los Angeles School of Optometry and moves to the Wright & Callender Building.

1922 - The "Reflex," a student newspaper, is first published and becomes the school's yearbook.

1925 - The school is the first to be given an accreditation rating of "A" from the International Association of Boards of Optometry.

1930 - The school becomes part of USC’s Department of Physics and Optics. A degree of Bachelor of Science in Optics is awarded upon completion of the four-year course, but is discontinued after three years. The school moves to a house on University Ave., paid for by Carrie Hooker Reidell, the school’s secretary.

1938 - The Los Angeles School of Optometry becomes a non-profit corporation and a board of trustees is formed.

1955 - The first Doctor of Pharmacy degree is awarded.

1962 - The first residency accreditation standards are approved by the American Society of Hospital Pharmacists.

1968 - The American Association of Physician Assistants is established.

2009 - The SCCO Board of Trustees approves a Master of Science in Vision Science degree program.

2012 - The SCCO Board of Trustees establishes the School of Physician Assistant Studies, the first PA school in Orange County.

2013 - California enacts SB 493, which allows pharmacists to be recognized as providers and deliver basic care services.

2013 - The SCCO Board of Trustees establishes Marshall B. Ketchum University.

2014 - Marshall B. Ketchum University establishes the College of Pharmacy.

2016 - On November 11, 2016, the inaugural commencement ceremony was held for the School of PA Studies. Twenty-seven students received a master's degree as well as a PA certificate.

2016 - The first class of pharmacy students begins the Doctor of Pharmacy degree program.

Marshall B. Ketchum: Timeline of the Life of Our Founder

1882 - Graduated from the Eclectic Medical Institute in Cincinnati, Ohio.

1887 - Obtained a license to practice medicine in California.

1896 - Moved to Lincoln, Nebraska to join the faculty at the Lincoln Medical College.

1896 - Began as Chief Instructor of the Lincoln Optical College.

1904 - Moved to Los Angeles and opened the Los Angeles School of Ophthalmology and Optometry, becoming the proprietor and sole instructor.

1914 - Entered into a partnership with Dr. William M. Ketchum (his nephew) for the operation of the now Los Angeles Medical School of Ophthalmology and Optometry.

1916 - Transferred ownership of the school to Dr. William M. Ketchum.

1920 - Stepped down as president of the school.

1920 - Published "Ketchum's Lessons on the Eye," his only textbook.

1928 - Ended his teaching position at the school.