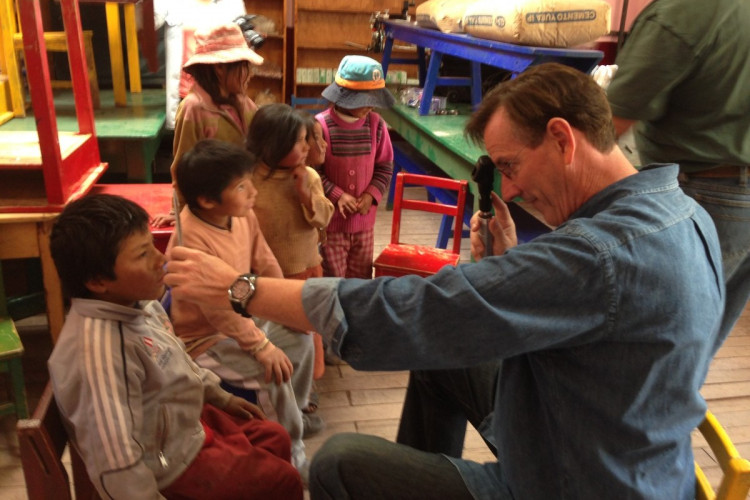 John Larcabal didn’t necessarily have optometry in mind as a profession when career day rolled around at his high school in Lemoore, near Fresno in the Central Valley of California. Seeing his own optometrist listed, however, he figured he should show his support.

What he heard made quite an impression, and not just on Larcabal. Two of the three students listening to Dr. James Forte that day went on to become optometrists. “I’d say that’s a pretty good average,” says Larcabal. The son of a Basque sheepherder and Azorean (Portuguese) mother, both of whom had to drop out of school to help support their families, Larcabal was raised to value education. He graduated from the Southern California College of Optometry in 1988.

“The education at SCCO was phenomenal, and it’s only gotten better over time,” he says.

For the past 20 years, Larcabal has taught Practice Management at SCCO along with Peter G. Shaw-McMinn, OD, class of 1978, and Eddy Naime, OD, class of 2005, all the while running successful practices of his own.

Just a year after graduating from SCCO, Larcabal purchased a practice in Norwalk. Then, 10 years ago he opened a new practice in Brea with another SCCO alumna from the class of 2005, Diane Almanza, OD.

“A number of patients were driving from Brea to Norwalk to see me, so they were very happy when I opened up an office closer to home,” Larcabal says. With the addition of Lisa Matsui, OD, SCCO class of 1993 and member of MBKU’s Alumni Association Board, the practice has grown quickly.

Larcabal’s life is not focused solely on business, however. Over the past decade, he’s been involved in a number of humanitarian projects, bringing vision services to less developed areas around the world.

So far, he’s been to Fiji, Mexico, Guatemala, El Salvador, Venezuela, Columbia, Peru, Uganda and Haiti, and has plans to visit Israel and revisit Peru and Guatemala later this year.

In some places he sees up to 600 patients a day, splitting his time between patient care and working with local optometrists to build up their infrastructure of self-sustaining optometry programs in the area. He recently traveled to Uganda to help establish and open an optometry clinic in Kampala, the capital, where few optometrists exist. “I was able to use my practice management experience to help the optometrist open up his practice and teach him some basic skills on how to run it,” Larcabal says.

“I feel very blessed that I get a chance to give back. The thing I realized is that in a lot of these third world countries, the people are very poor, but very happy. They’re immensely grateful for the help that is provided for them. And of course it’s very rewarding. You always get back much more than you give.”

Larcabal mentions that he wouldn’t be able to do his humanitarian efforts without the support and assistance of the other doctors in his practices: Dr. Almanza, Dr. Matsui, and Dr. Sandy Stevens (SCCO class of 1988).

Optometry is now one of three professions taught at Marshall B. Ketchum University, with physician assistant and pharmacy programs being added since 2013.

The new interprofessional environment will be experienced to full advantage at Ketchum Health, a state-of-the-art center opening this spring where all three disciplines will eventually practice side-by-side. The interprofessional approach, Larcabal says, helps students be more comfortable as they graduate and begin working in settings where they interact with other health care professionals. Additionally, excellent faculty with extensive experience in their fields bring a practical perspective to the educational process.

“Within the optometry program, I think the education is second to none,” he says. “Our graduates come out so well prepared and so well trained it’s amazing. SCCO is on the forefront of providing the best optometric education anywhere.”

The fact that he’s gone into business with several SCCO graduates attests to his recommendation. They bring updated education and a fresh perspective to the practice, he says.

“I think one way we can support the profession as well as the school,” he says, “is by bringing on newer graduates, and then training them in our practices and giving them opportunity to grow and to learn in different settings.”

Besides offering time and resources as a faculty member and alumni contributor, Larcabal says he likes to support his alma mater by getting involved in local programs, promoting the advantages of optometry as a profession.

“I think by educating students - high school or college students - about the advantages of optometry and directing them in that area, we will help strengthen our pool of applicants and help strengthen the school as well,” he says. “And then, of course, helping out financially, which helps minimize the costs for the student. What we give assists future colleagues by helping to reduce their indebtedness as much as possible.”

While Larcabal plans another humanitarian trip overseas soon, he realized an important truth after his first trip to Venezuela, that is just two blocks from his office in Norwalk there were kids who were in as much need as in a developing country.

“We don’t have to look very far to help,” he says. “Right in our back yards there are opportunities to serve and to provide eye care to those who are underserved. I just try to encourage others to do what they can locally to try to make a difference.”