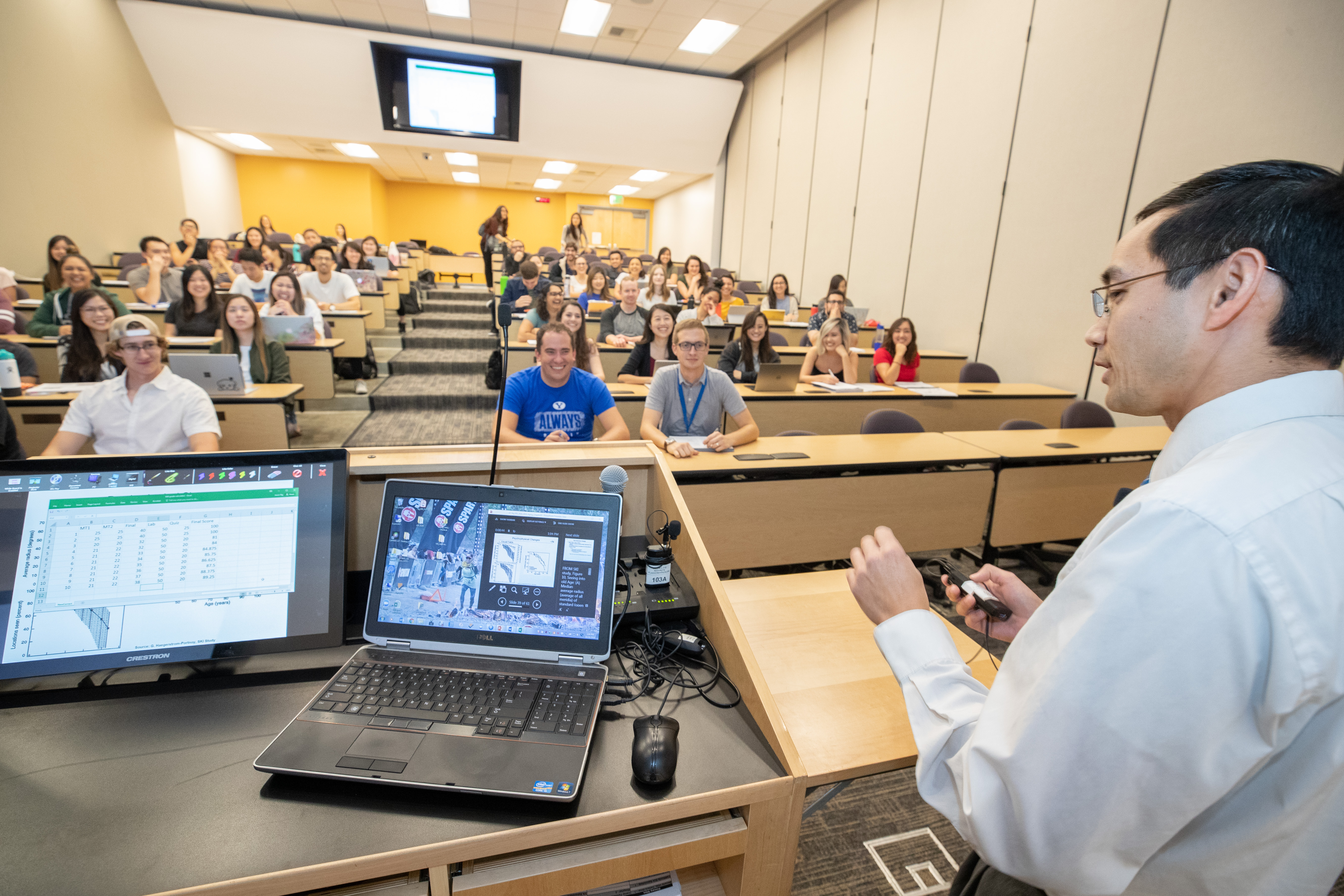 As Marshall B. Ketchum University began to take shape under the leadership of President Kevin L. Alexander, forging a new identity as a premier interprofessional health care university on the foundation of a long-established optometry school, its physical campus was reflecting this process as well.

It was evolving as a space that welcomes students even more, puts them in fellowship with each other and faculty, and provides them with the technology and tools to excel in their education. A period of building, moving, renovating and expanding has brought MBKU’s campus in line with President Alexander’s vision of a truly interdisciplinary institution. The work hasn’t always been predictable, but because of the patience of just about everyone in Ketchum’s community, as well as the support of generous benefactors who invested in the vision of an expanded campus, students, alumni, faculty and staff can look back with pride on a number of completed projects that represent a beautiful, modern, cutting-edge health care university.

When MBKU added the College of Pharmacy in 2014, it was a make-or-break moment for the campus. “We had enough space for optometry and PA Studies, and with creative use and astute scheduling, we could accommodate those two programs,” explains Julie Schornack, OD, MEd, who, as MBKU’s Senior Vice President and Chief of Staff, has been intimately involved with all of the details of MBKU’s growth. “But when we added the College of Pharmacy, that was not the case. So we had two major alternatives. We could keep the Fullerton campus as it was and peel off PA Studies and Pharmacy – but that solution would be counter to getting all the professions to work together, collaboratively, with laboratories and lectures in the same geographic location.”

It was determined that the other alternative made the most sense, which was to move the on-campus optometric clinic to another location to create space for the educational programs. And so began a long journey to find real estate in Orange County that would accommodate the health clinic and also provide room and flexibility to grow in different directions. Many choices were stymied by a lack of space, or by new regulations requiring a certain number of parking spaces, until finally an 80,000-square-foot office space with tons of parking was found in Anaheim Hills. Just about a year later, Ketchum Health opened. 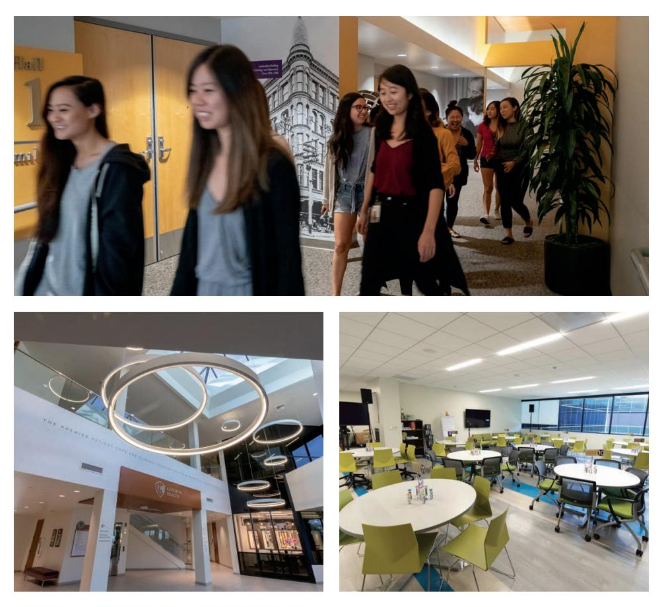 Three-fourths of Ketchum Health is dedicated to the clinical endeavor and clinical faculty, with other staff and administrative offices and undeveloped space as well. Ketchum Health has within it a beautifully appointed study and gathering space named The Drs. Hamada Student Lounge, which was established by a generous gift from the Hamada Family Trust. The lounge, the offices and the clinical space all comprise a world-class facility where students are mentored in how to care for patients well, benefitting both. “Ketchum Health is our hospital,” says President Alexander. “It’s where we expect the bulk of our learning in a guided environment, where students get their practical clinical experience before they go on rotations. And the dream there is that we would have a facility where ultimately optometrists, pharmacists and PAs can care for patients together in a team approach.”

With the new clinic now in Anaheim Hills, the old clinic on the Fullerton Campus became valuable space to work with in creating capacity for the PA and Pharmacy programs. It was christened the Health Professions Building, and was fully renovated with classrooms, laboratories, examination rooms, administrative space, simulation labs and a student lounge. “That project brought everything together, allowing all three of the professions to be trained and educated in one location,” says Dr. Schornack.

As the Health Professions Building was being transformed into an educational facility, other important spaces for education were being updated to meet the needs of current teaching practices. The three large lecture halls were renovated with new flooring, new audio-visual presentation systems and more contemporary colors and designs, and the campus library was redesigned to better accommodate the way students use libraries these days. “Today, libraries aren’t just stacks of books,” says Dr. Alexander. “Libraries are centers for information and technology, and they are places where students can get together and study together. We’re going to try to create good contemporary spaces for students to learn. When I was in optometry school 40 years ago, I had a group of people I’d study with to prep for exams. And I see those same kinds of groups in our meeting areas now, so I don’t think you can have enough of those spaces!”

With plenty of educational space for three programs and a beautiful new clinical facility, the plan was to do some overdue infrastructure upgrades to the Warren and Carol Low Student Union. “The Student Union project started with the goal of updating the electrical system to support the electrical demands of instruments, appliances and computers these days,” says Dr. Schornack. “However, it was like pulling a loose thread on a sweater – and that sweater unraveled quite a bit.” The thread that began with electrical systems led to the thread requiring asbestos abatement, which led to the need to make the building compliant with the ADA and with other regulations governing things like lighting efficiency. As the project became bigger, MBKU doubled down, going all out to not just meet regulations but to create a fantastic, usable space for students. This included more comfortable furniture, more USB charging ports, a large roll-up door creating indoor/outdoor space, as well as more food and food-prep options. This was all made possible by a gift of $2.7 million from Warren Harvard Low, OD, ’52, and and his wife, Carol Low. According to Carol, the late Dr. Low supported the growth of the college to a university and especially loved helping those in need be able to attend through financial assistance: “It would bring him great joy to know that he and I were able to provide a more enjoyable student experience with the remodeling of the Student Union, and that his gifts helped propel the beginning of the School of PA Studies and College of Pharmacy.”

That extra space in Ketchum Health designated for future growth was subsequently put to use in a couple of important ways. One was to build out a Family Medicine clinic, which will create more diverse options for clinical rotations and education, and another was the Pharmaceutical Sciences Research Lab (PSRL). The PSRL was designed with state-of-the-art research equipment specifically chosen to meet the needs of the ongoing projects conducted by faculty members in the College of Pharmacy. It included 12 work stations, a cutting-edge tissue/cell culture laboratory, and other essential support equipment such as vent hoods and formulation instruments. The lab was an essential element in the College of Pharmacy’s path to accreditation and a perfect representation of MBKU’s dedication to building facilities that serve not just faculty and students, but also the health professions as a whole.

In addition to these major projects, other, smaller renovations were also completed at MBKU in the last five years. The campus fitness center was updated, and an earthquake shook loose – literally – a number of concealed issues with the safety and infrastructure of the President’s office, which was repaired and improved as a result. Through all of this work, the spirit of collaboration engendered by MBKU as an interprofessional educational institution was employed in the projects as well. “Virtually all of these spaces were collaborations,” says Dr. Schornack. “We got feedback from the parties that lived there. We tried to get a sense of what would be important for the people in these buildings, what was going to improve their lives, what would make it more comfortable, usable, friendlier and warmer.”

The result is not just a university campus that is eminently usable for its students, faculty, staff and administrators, but one that remains on par with institutions of greater size and greater endowments. The support of the MBKU community enables MBKU to remain competitive for the very best students, who then go on to become the very best health care providers. “In the pursuit of quality in a very competitive market, we have to have premier facilities,” says Dr. Schornack. “And it’s not just the classroom, it’s the things we offer in the laboratories, it’s the whole feeling of a campus. We’ve looked at what will make our facilities good for faculty, employees and students, from amenities to the technology used in the classroom. It has be comfortable, supportive and nurturing. To remain competitive, an applicant has to be able to come here and say, ‘I can picture myself here.’”