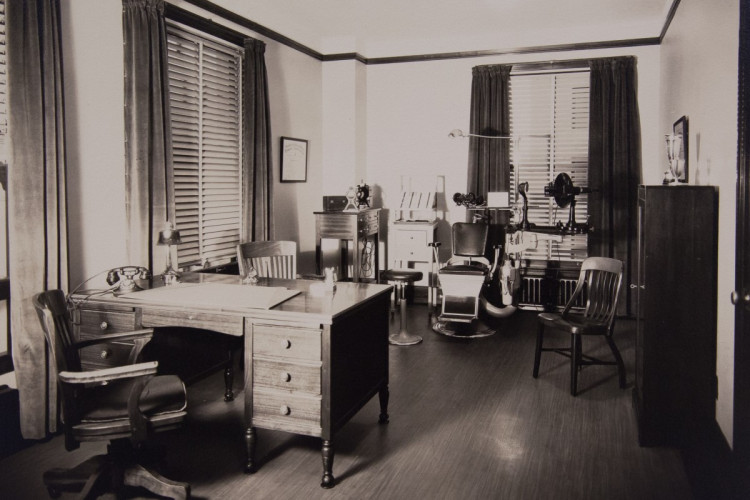 The Office of Alumni Relations was pleased to hear from John Derbyshire, great-grandson of Dr. Frederick Levi Derbyshire, Class of 1909 graduate of the Southern California College of Optometry and Ophthalmology. John shares the history of Dr. Derbyshire’s practice in the California town of Santa Paula:

Dr. Fred L. Derbyshire was born in Leeds County, Canada, on December 13, 1873. His father, Pembroke Derbyshire, was a bit of a Renaissance man — a dairyman, cheese maker and oil developer, among other trades. Showing a bit of his father’s business acumen, Fred learned the trade of cheese making in Canada and New York, operating several factories in Canada until moving to Santa Paula in 1904.

When arriving in California, Fred opened a barber shop, operating it while embarking on his studies in optics and ultimately completing postgraduate work in 1909. He opened his office in the town’s Farmers and Merchants Bank building. A few small clippings from the Santa Paula Chronicle newspaper noted Fred’s willingness to exchange eyeglasses for trade, including chickens, as Santa Paula at that time was mostly a small farming community.

John states, “I am very proud of the people your school produces and the value they add to society. My great-grandfather’s story should inspire others to not only improve the physical health of their communities but to contribute to the general well-being of the community around them.”

Thank you, John, for reaching out and sharing this snapshot in time that has had such a meaningful legacy for your family and the greater community.

Contact us to share your legacy stories, and visit ketchumlegacy.org to learn more about how you can create a charitable legacy of your own.