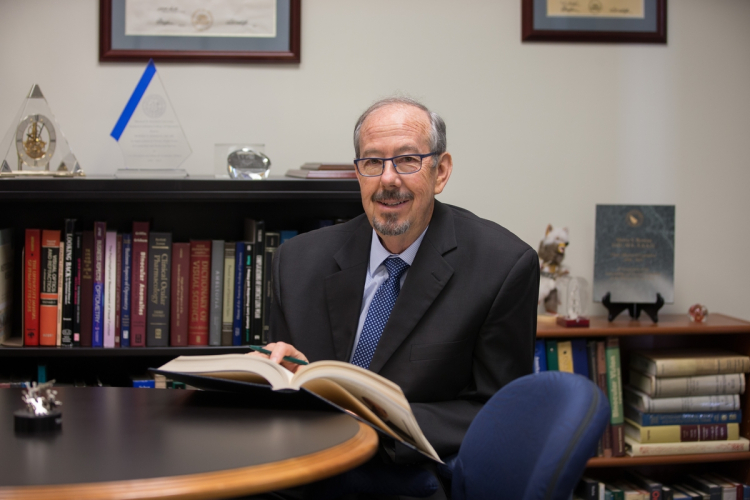 As the son of an optometrist, Dr. Morris Berman began his career expecting to follow in the footsteps of his father.

More than 40 years later, this July, Dr. Berman will retire as provost of Marshall B. Ketchum University, which has evolved from its founding in 1904 as an independent optometry college in Los Angeles to a health sciences university, offering four professional degrees within an interprofessional health care educational framework.

Since joining the university in 1985 as the dean of academic affairs, Dr. Berman has played a pivotal role in each step of MBKU’s and SCCO’s journeys. "In his role as university provost, Dr. Berman has been responsible for the academic quality of all MBKU’s programs, and his leadership has been instrumental in making the transition to a university," said University President Kevin Alexander, OD, PhD.

First steps: From a private practice to academia

Dr. Berman began his journey as a practicing optometrist in Pretoria, South Africa. He wanted to build on his professional knowledge, a desire that led him far from home. He completed a residency program at the Optometric Center of New York in 1969, where exposure to “innovative and dynamic” approaches to patient care inspired him to continue his studies. He earned his Doctor of Optometry and Master of Science in Physiological Optics degrees at the University of Houston College of Optometry. His academic curiosity had prepared him for a career path in teaching and research. Prior to joining SCCO in 1985, he was a faculty member UHCO and later served as the assistant dean for education at the Illinois College of Optometry in Chicago.

“At SCCO I served as a clinical preceptor for a several years as well as an exam proctor for the preclinical laboratory courses,” reflected Dr. Berman. He was also an instructor for a number of courses. However, it was in 1992, when the curriculum committee approved an independent course in professional ethics (which has now evolved into a medical ethics course that is part of MKBU’s interprofessional educational curriculum) that Dr. Berman began his “most rewarding teaching experience,” 20 years of leading discussions about ethical issues with first-year students.

Service steps: From AAO, ASCO and COA to a Lifetime Achievement Award

Over the span of his career, Dr. Berman has served the profession in several capacities. He has served as the chair for the Academic Affairs Committee of the Association of Schools and Colleges of Optometry and as the first editor of ASCO’s publication Eye on Education. Dr. Berman also chaired a national conference on the Optometry Curriculum Model in 1992 which formed part of the Summit in Optometric Education series and led to teaching innovations, including problem-based learning at several schools and colleges of optometry.

As a volunteer with the American Academy of Optometry, he chaired the AAO Education Program Committee from 2001-02, served on the Awards Committee, and chaired the Nominating Committee. With the American Optometric Association, he has served on the Ethics and Values Committee since 2005, including five years as chair. The committee revised the AOA’s Code of Ethics, developed the Standards of Professional Conduct and currently hosts an Ethics Forum. He served on the Task Force on Para-Optometric Continuing Education of the California Optometric Association from 1987-88, as well as the Therapeutic Pharmaceutical Agent Study Committee of the COA in 1996-97. He has lobbied in Sacramento, on behalf of the COA, to successfully expand the scope of practice for doctors of optometry in California.

In recognition of his exemplary leadership and contributions to optometry education and the profession as a whole, ASCO recently announced that it is awarding its Lifetime Achievement Award to Dr. Berman in 2016.

“Throughout his entire career, Dr. Berman has exemplified what it means to be a leader in optometric education, having made — and continuing to make — outstanding contributions,” said ASCO Executive Director Dawn Mancuso, MAM, CAE, FASAE.

Reflection Steps: Looking back on a 31-year career at an evolving institution

Dr. Berman’s journey at MBKU and SCCO encompasses three decades of significant changes, including the expansion of the campus and construction of new buildings, the innovations in pedagogy and educational technology, and expanded student clinical opportunities.  Dr. Berman shared that the university will continue to evolve in response to the changes in health care delivery. “When I entered the career, optometry focused on refraction, contact lenses, vision therapy and low vision – all aspects of non-medical vision care,” he recounted. “Since the early 1970s, state laws expanded scope of practice, positioning optometry as the primary eye care profession. Education has partnered with the legislative changes to educate students to deliver comprehensive care to patients, including diagnosis and treatment of eye health and systemic health problems.”

Consequently, as he reflects back on his career, Dr. Berman shared that the most significant aspect of his career was “being a part of a team directing change, to benefit the college and the profession.” He also shared admiration for the teamwork of administration, faculty and staff that offered important collegial and professional working relationships. Moreover, he noted his appreciation for the stability at the university, attributed, in large part, to the success in recruiting high quality faculty members and students.

Dr. Berman credits a number of colleagues and leaders who supported and mentored him during his career, particularly former SCCO President Richard L. Hopping, OD. Dr. Hopping was a model chief executive who placed the profession and the college first. “Dr. Hopping was also very involved in service to the profession and he encouraged my involvement in national organizations,” said Dr. Berman. He also shared high praise for the two succeeding SCCO Presidents, Lesley L. Walls, OD, MD; and Kevin L. Alexander, OD, PhD, remarking that “it has been a privilege to work closely with these influential leaders, each of whom has made a lasting contribution to the profession and brought their unique talents and abilities to benefit the institution.”

Of also-retiring Drs. Bookman and Voorhees, Dr. Berman shared his appreciation of their integrity: “Having worked closely with the both of them, I couldn’t have asked for two people with such a high level of professionalism, who care deeply about the best interests of institution, its students and faculty. Their council has been invaluable to me throughout my career,” he continued.

Retirement Steps: The road ahead

In approaching his retirement from MBKU, Dr. Berman will miss the ongoing relationships with people that he has shared at the institution. “When you work each day with people you like and respect, you build strong relationships. “We developed into a family and truly care about each other.”

The active provost, whose career spanned nearly 40 years and many stops along the journey since his first days as an optometry student in the Johannesburg, South Africa, plans to remain active in the profession. He will continue to serve on committees, assist other newly established programs and make more time for other interests — improving his golf game, taking classes and volunteering.