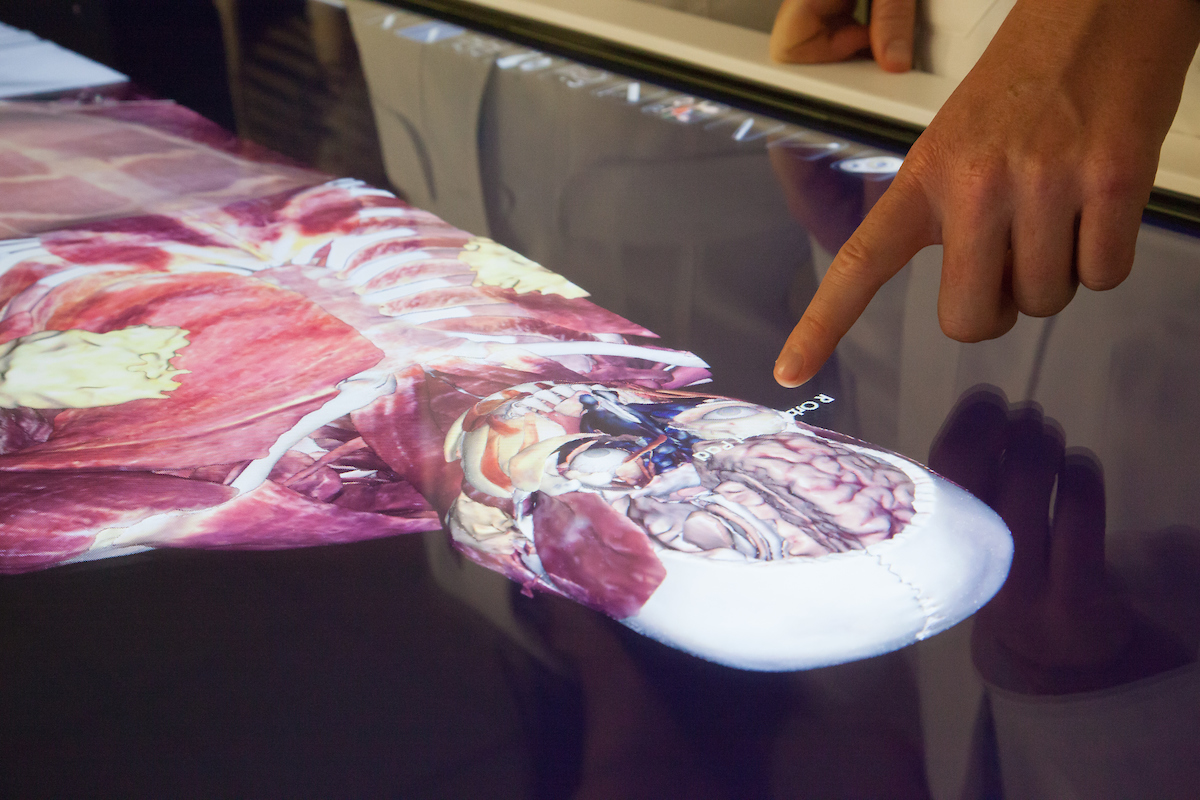 Ever since his vision turned Marshall B. Ketchum University into an interprofessional campus, University President Dr. Kevin Alexander has been focusing on implementing the core value of innovation across both of the university’s programs.

Thanks to the generosity of alumni and donors such as Dr. Joseph (ʼ49) and Mrs. Peggy Taylor and the alumni and friends who charitably donated to this important cause during the fifth annual MBKU Gala, Marshall B. Ketchum University has carried the theme of innovation through technology into its classrooms with the recent purchase of two virtual-dissection Anatomage tables for its PA school and a total of eight virtual reality indirect and direct ophthalmoscopy simulators for its optometry program.

The two Anatomage tables, which PA students began using in February, replace traditional methods of dissection and anatomy instruction such as cadavers, textbook diagrams and models. The touchscreen tables are essentially giant, Windows®-operated tablets and come pre-loaded with image scans from real cadavers and patients. The tables contain life-size, full-body image scans of each an actual male and female cadaver. As is common practice in cadaver labs, upon receiving the tables, the students heard the patients’ stories — both were in their 30s when they died from cancer — and took a moment to honor their lives.

The software allows for a customized experience: students can view the entire body, or only certain organ systems or a combination thereof (e.g., the gastrointestinal or reproductive system), and the tables can lay horizontally, resembling an operating table, for ease of use when learning in groups or stand vertically for use in lecture. Students tap to label parts of the body and quiz themselves on their memory. More taps remove layers of the body such as skin, muscle and tissue to reveal which organs are underneath. Users can rotate the 3-D image scans to view body parts from different angles, including cross-sections, and can restore the scans to their original state after dissecting tissue and try again.

“The tables help different types of learners; for example, I’m a tactile learner, and the hands-on experience has really helped me,” says student Soquel Schafer ’17.

The 3-D approach is helpful to students Helen Zhu and Rebecca Fort, also graduating in 2017, who felt their textbooks didn’t give them a good grasp of where organs were in relation to muscles or how everything is positioned. The tables also give them a sense of the real grittiness and messiness of the body in terms of color and organ arrangement.

“We can relate better to the anatomy by seeing it in 3-D,” says Zhu.

The tables also include image scans from other real patients, highlighting only the affected areas or systems, such as aneurysms, bone fractures or cancer, and comparative pre- and post-operative procedures.

As Ketchum’s PA school is only in its third year, the school has never had a cadaver lab, opting instead to use the Anatomage tables. Though the up-front expense is high, the tables are sustainable and cost-effective in the long term, because unlike cadavers, they can be used indefinitely and do not need maintenance or special equipment for storage. Further, the use of the Anatomage tables is not limited to the PA school, as the inaugural class of the College of Pharmacy began using the tables on the first day of instruction this fall and the technology is also accessible to all SCCO students.

In March, first- and second-year optometry students began using the two Eyesi Direct and six Eyesi Binocular Indirect Ophthalmoscope simulators. Both types of simulators help students get accustomed to handling the devices and learning the basics of performing an ophthalmoscopy exam, an essential real-world skill and one that is hugely beneficial to learn in a safe, simulated environment.

“Simulators can’t teach everything, but they can help with the learning curve of the real world,” says Associate Dean of Academic Affairs Raymond Chu, OD, MS.

To operate the BIO simulators, students put on a virtual reality BIO headset. Once the lens and the BIO are properly aligned, which takes a lot of effort, precision and adjustment, the virtual image of the retina appears on the computer display which reflects the student's view of the retina.

Like a video game, the software places colored shapes — stand-ins for actual abnormalities but in a beginner-friendly format — at different points in the eye. Once students locate the shapes, they compare their findings with those of the computer. Because the image is viewed upside-down and flipped horizontally from reality, it takes some mental gymnastics to figure out where exactly the shape is.

BIO is a difficult skill to master because students have to connect three points — their eyes, the lens and the patient’s eye — and then look around the patient’s eye while keeping the image in focus and moving the lens and the headset around. For students, the biggest benefit of the simulators is the chance to gain proficiency in BIO before practicing on classmates, friends or significant others.

“We usually learn [ophthalmoscopy] on each other in the fall quarter, so we’re still going to do that, but now that we’ve had exposure to virtual reality patients, we’ll be able to hit the ground running this fall on a pretty tough, difficult procedure,” says optometry student Warren Morton ’19. “This will make us better clinicians when we start seeing real patients, because we will be more competent and confident in our abilities in BIO.”

The computer gives feedback on the length of the exam, how much light the student exposed the patient to, what percentage of the eye the student viewed over the course of the exam, if the student missed any diagnostic elements or abnormalities, and correctness in their findings.

The Direct Ophthalmoscope simulators operate very similarly, the main difference being that instead of wearing headgear, students look in with a direct ophthalmoscope that they hold up to a full mannequin head to see the back of the eye, including the optic nerve and the macula, in more detail. Through this technique, students can see if any related health conditions, such as diabetes, are affecting or will soon affect the patient’s vision.

The devices’ built-in curriculum serves optometrists at all levels, from first-year beginners to advanced fourth-year students to professors and practicing optometrists, who use them to brush up on their ophthalmoscopy skills. The software includes several case studies for a realistic experience, and the curriculum’s progression lets beginners discover what a normal eye looks like and helps advanced students to diagnose abnormalities.

Students receive scheduled practice time on both types of simulators but can practice more if they need to and can learn on their own timetables. The software can track each individual student’s progress so the faculty knows if a student is struggling and so they can spend time with the student one on one. Morton points out that the simulators are good recruiting tools for future students, who will likely be drawn to Ketchum’s emphasis on innovation, as Ketchum is one of very few schools across the country to use them. “It has the wow factor that students look for and are impressed by,” he says.