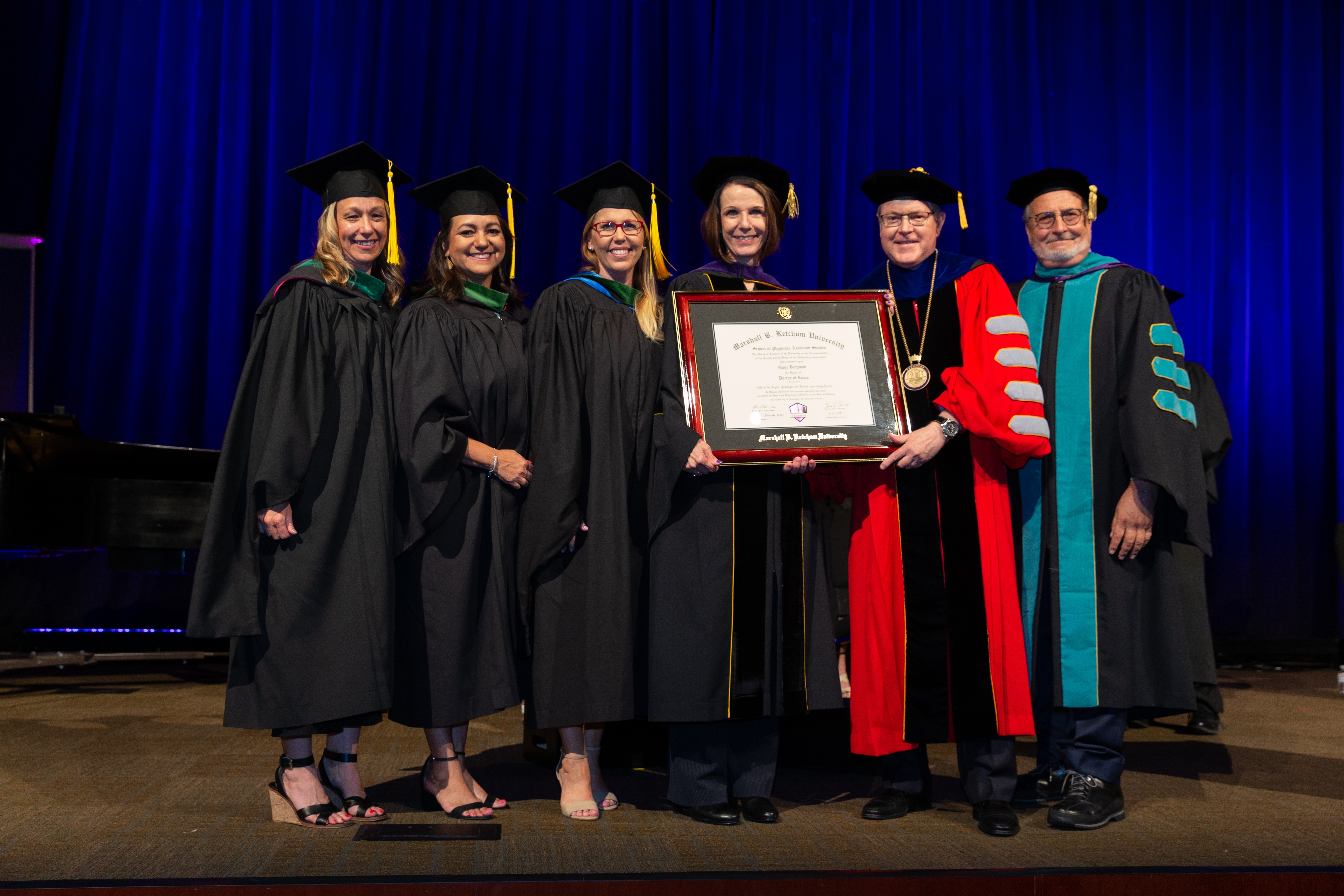 No reasonable person would suggest that getting a degree from Marshall B. Ketchum University is “easy” – whether a student goes through the optometry, the pharmacy, or the PA studies programs, they are looking at multiple years of rigorous study, heavy course loads, and demanding clinical rotations. But you could also get a degree from Ketchum the way Gaye Breyman did: get hired by a fledgling association advocating for a brand-new medical profession, work tirelessly at every level of government in California to advance their interests for 30 years, and conduct this work with such distinction and diligence that you are granted the very rare privilege of an honorary doctorate degree from Marshall B. Ketchum University, for the gratitude it owes you for playing an important role in its immediate and profound success.

It could be argued that Gaye’s strategy ranks as the more challenging one, but Gaye herself might disagree. On the cusp of her retirement as Executive Director of California Academy of PAs (CAPA), Gaye sees her 30-year career as a pleasure. “I like to say the work found me,” says Gaye. “This is surprising to some people, but I am not a PA; I was looking for a business managerial role and stumbled across CAPA, which was at a point where they needed a designated person to help manage their affairs. We had no money back then, just excitement and the passion that comes from it.”

This passion was shared by the PAs themselves, who had quickly realized that the restrictions placed on them when the profession was little more than a bold experiment in health care were severely limiting the good they could do. When the “experiment” proved a success, CAPA was essential in chipping away at these restrictions piece by piece, for the benefit of PAs and the patients they cared for. Gaye was crucial to CAPA’s success ever since those early days and her leadership guided CAPA through difficult times and good – always with the goal of doing things the right way no matter what. “What I am most proud of is how we were able to sustain a tradition of integrity throughout my time at CAPA,” says Gaye. “Our work was always about PAs, and what was right for them, and we conducted ourselves with excellence all along the way.”

As Gaye prepares for her retirement, the accolades and honors have been pouring in. One of the most special is from CAPA itself. They have recognized Gaye’s leadership by creating the Gaye Breyman Outstanding Leader Award, which is a special, non-annual award available for CAPA to recognize special leaders within the profession. The description for the award is a biography of Gaye’s qualities: “This recipient must embody CAPA’s Mission and conduct their manner with the highest degree of professionalism. They further must serve as a role model to other leaders, demonstrate initiative, and inspire others to adhere to CAPA’s Mission. Personal characteristics of respect, integrity, honesty, and commitment to doing the right things are the required qualities of the recipient of this award.”

Among those honoring Gaye for her leadership and integrity is Marshall B. Ketchum University. When MBKU’s PA program was just in the planning stages, Gaye was invited to a dinner with President Alexander and other members of his administration. ”They were hungry for information about PAs and the profession. As I became more involved in helping them build the program, I realized there was something about the culture at Ketchum that was perfectly aligned with my own devotion to excellence.” Gaye proved instrumental in helping MBKU become MBKU, from advising on how to shape elements of a strong PA program to helping choose the new name of the University.

One of the many ways Gaye serves Ketchum is as a member of the Board of Trustees, and because of this she understands what a rare and precious honor it was when the current Board voted unanimously to grant her the honorary degree. For outstanding contributions to the health care profession, Ketchum awarded Gaye the Doctorate of Laws during the School of PA Studies commencement ceremony on November 8, 2019. “The graduation ceremony was the highlight of my career,” says Gaye. “So many people came to support me, including my children and my granddaughter. It meant a lot to me that my family got to see me honored for many years of hard work advocating for PAs.”

The diploma Gaye received is so much more than words on a page. It represents Gaye’s years of important work to advance the PA profession, as well at Ketchum’s dedication to the same cause. “I waited a long time for there to be a PA program in Orange County. I grew up in Orange County, and having worked with CAPA, I knew the medically underserved areas well.  Early on, I saw that MBKU had a commitment to those underserved areas. They were clear in their goal to educate students to go back to these areas after graduation. I believe if you’re going to put words to the page, you’ve got to live them! Ketchum doesn’t just put words to the page; they live their mission, core values and vision statements. It is a pleasure to be part of the MBKU family.”