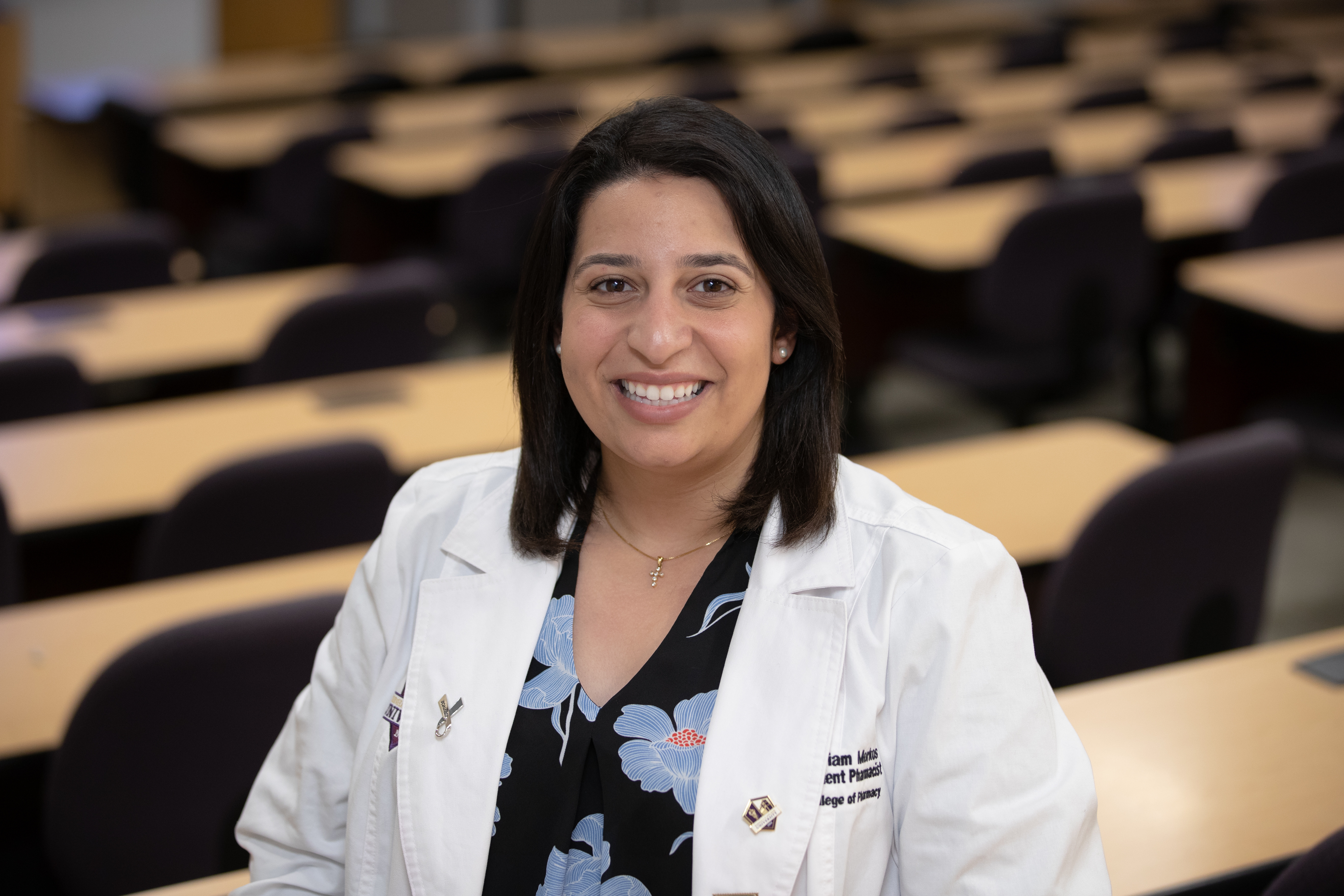 College of Pharmacy at Marshall B. Ketchum University student Miriam Morkos, COP, ’20, learned the importance of pharmacology firsthand – as a patient in the intensive care unit. The experience led her to a career she loves.

“Having that patient interaction with an ICU pharmacist made me know that was exactly what I wanted to do,” says Morkos.

Morkos was diagnosed with a benign brain tumor in her late teens. The tumor was discovered by an ophthalmologist after she sought help for blurred vision and horrific headaches. After the surgery to remove the tumor, she experienced seizures and was given an anti-seizure medication that caused her to have hives. It was an ICU pharmacist who came to her room and identified that she was allergic to her medication and suggested an alternative medication.

“I got to experience what patients experience,” says Morkos. “That led me to major in pharmacological chemistry in college and I loved it.”

Morkos considers herself lucky to have figured out early what she wants to do with her life. She loved studying pharmacologic chemistry at the University of California, San Diego and when she was accepted to MBKU’s College of Pharmacy she was thrilled. She says her experience at the College has exceeded her expectations.

“The professors are a huge part of why I love MBKU,” she says. “They motivate you as much as possible and try to help you live up to your goals and potential … One of the cool things about our school is we have an open door policy. We don’t have to make an appointment.”

“I go to them for life and career advice and steps I should take to get into a residency,” she says. “ I am extremely grateful to have gained such amazing life long mentors who challenge me to get out of my comfort zone and pushed me to go above and beyond my limits .”

Morkos also says she loves the “family-like” feel at MBKU.

“Because of the small class size, we are like a family,” she says. “We don’t have that competitive spirit,”

From Shy to Gregarious

Morkos is grateful for overcoming her brain tumor for another reason, too – it led to a shift in her personality. Growing up, she was shy, but the work she had to do to gain full recovery from the tumor pushed her to embrace courage and reach out to others.

“It was a big eye-opening moment after my surgery … I realized nothing can stand in my way. I have a lot of grit,” Morkos recalls of the difficulties of continuing her undergraduate studies after major surgery. “I wanted to change from that shy person.”

No one who knows Morkos’ activities at the College would now call her shy. She has served as a class liaison, peer advisor, peer tutor, admissions ambassador and on the College’s assessment committee. She formed an ad hoc committee to organize the end-of-year banquet for faculty and students and created a student-of-the-year award. She is secretary of the College’s chapter of the California Pharmacists Association. Her membership in CPhA allowed her to volunteer at various health fairs serving the underrepresented communities. “ Growing up in an underserved area, I saw the need for health care, so participating in health fairs was my way of giving back to the community”

Morkos says she considers event planning a hobby and her skill at that hobby comes in handy with her many student groups and events. She also loves photography.

“On campus you’ll see me running around taking pictures of my classmates,” she says.

Morkos’ parents emigrated from Egypt before she was born. She is the only member of her family to enter the medical field. After graduation, she hopes to complete a residency program and then return to practice in Southern California. She also hopes to return to MBKU.

“I want to come back and be a professor,” she says. “That would be an excellent way to give back to a University that has given so much to me.”