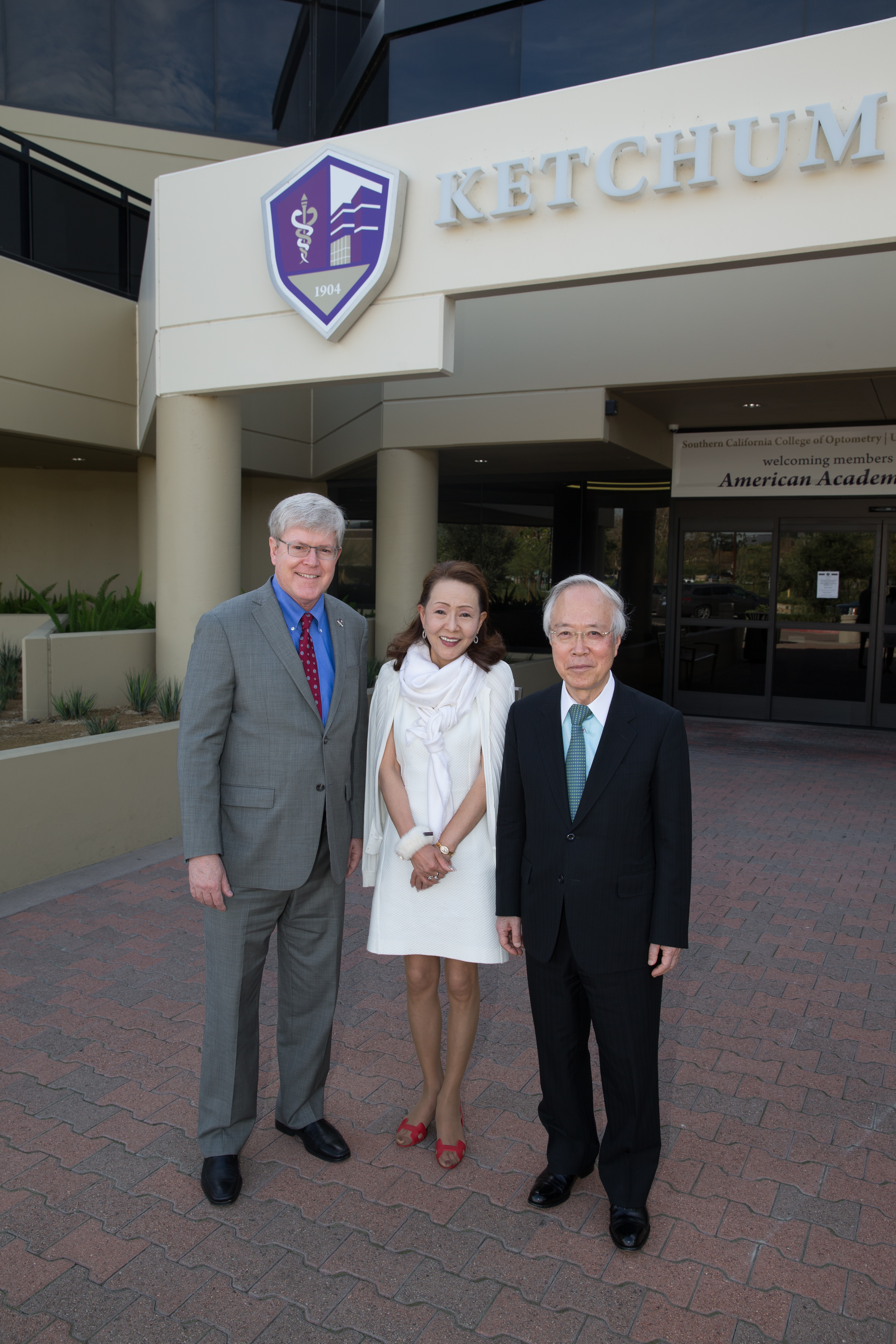 For more than 35 years, Dr. Kanai’s Fuji Aid Mission has traveled annually to work in war-torn regions. He first worked with Indochinese refugees in Thailand, then with refugees in Nepal and Armenia and since 2005 has traveled to Azerbaijan to examine the Internally Displaced Persons (IDPs) and fit them with eyeglasses.

He received the Yomiuri International Corporation Prize given by the Yomiuri Newspaper Company, the largest newspaper organization in Japan and perhaps the largest in the world, with more than eight million subscribers.

The November 2017 award ceremony was held at the Imperial Hotel in Tokyo. The 5 million yen awarded as part of the prize was donated to the IDPs and refugees in Azerbaijan. During the ceremony, Dr. Kanai received congratulatory greetings from Antonio Gutteres, the Secretary General of the United Nations.

Dr. Kanai also received recognition from the Japanese government for his international work with refugees. The Order of the Rising Sun, Gold Rays with Rosette, was conferred by the International Cooperation Bureau of the Ministry of Foreign Affairs at a ceremony last fall. The ceremony was followed by an audience with the emperor in the Japanese Imperial Palace.

“I decided in 1983 that I wanted to do something for society,” Dr. Kanai said in a telephone interview from his office in Japan. “I wanted to use my profession in service. At that time, many refugees from Indochinese countries were going to Thailand and someone from the camps asked us to help improve their vision with screening and glasses."

When he visited the United Nations headquarters in Geneva in 2005, officials invited him to visit Azerbaijan. “They were in a similar situation and they needed our help.” Dr. Kanai is the second of three generations of his family to practice optometry. His two sons, Drs. Hiromasa Kanai and Kuniyoshi Kanai, are optometrists as well. Dr. Hiromasa Kanai practices at the Fuji Optical Company with his father; Dr. Kuniyoshi Kanai is an Assistant Clinical Professor of optometry at UC Berkeley. His elder son, Hiromasa, will accompany him in June when he heads again to assist patients in Azerbaijan.

“The refugee situation varies from country to country,” he explained. “In the case of Azerbaijan, we have 1,500 refugees from Chechnya, Iran and Afghanistan, and they have many displaced persons from territorial conflicts.

“About 10 years ago, there were 1 million displaced IDPs according to the government statistics,” he said. “We found out many of them needed glasses.”

In Japan and the United States, he explained, there are many near-sighted people. But among the refugees overseas he has discovered that many of them are far-sighted. “That is actually not good,” he said. “Your eyes get tired of focusing. With moderate to high far-sightedness your vision gets worse. Many of the people need glasses for daily life – for reading, writing and work.”

His recent awards are not the first he has received honoring his volunteerism. In 2006, Dr. Kanai received the UNHCR Nansen Refugee Award, which is presented annually to an individual or organization that has dedicated time going above and beyond the call of duty to help people who have been forcibly displaced from their homes. The award, presented by the United Nations Refugee Agency, is named for Fridtjof Nansen, a courageous Norwegian explorer and humanitarian who served as the first high commissioner for refugees for the League of Nations.

Kanai feels blessed with the abundance of his life, is humbled with the many honors he has received, and wants always to reciprocate for what he has by giving to people who need his help. “That’s why I started working with the refugees.”

He said he has many fond memories of his time at SCCO. “I was impressed by the quality of the education and the professional knowledge and skills of the professors,” he remembered. “The best part was the training I got   there. “In fact, Dr. Kanai said his education helps him every day in his work. “Without my professional education in optometry my life would be very different,” he said. “I’m very happy I chose optometry as my profession,” he added. “Because of optometry, I have had the opportunity to serve the refugees. The work is inspiring and appreciated. I feel I can do a lot to make people’s lives better. I feel quite fortunate.”