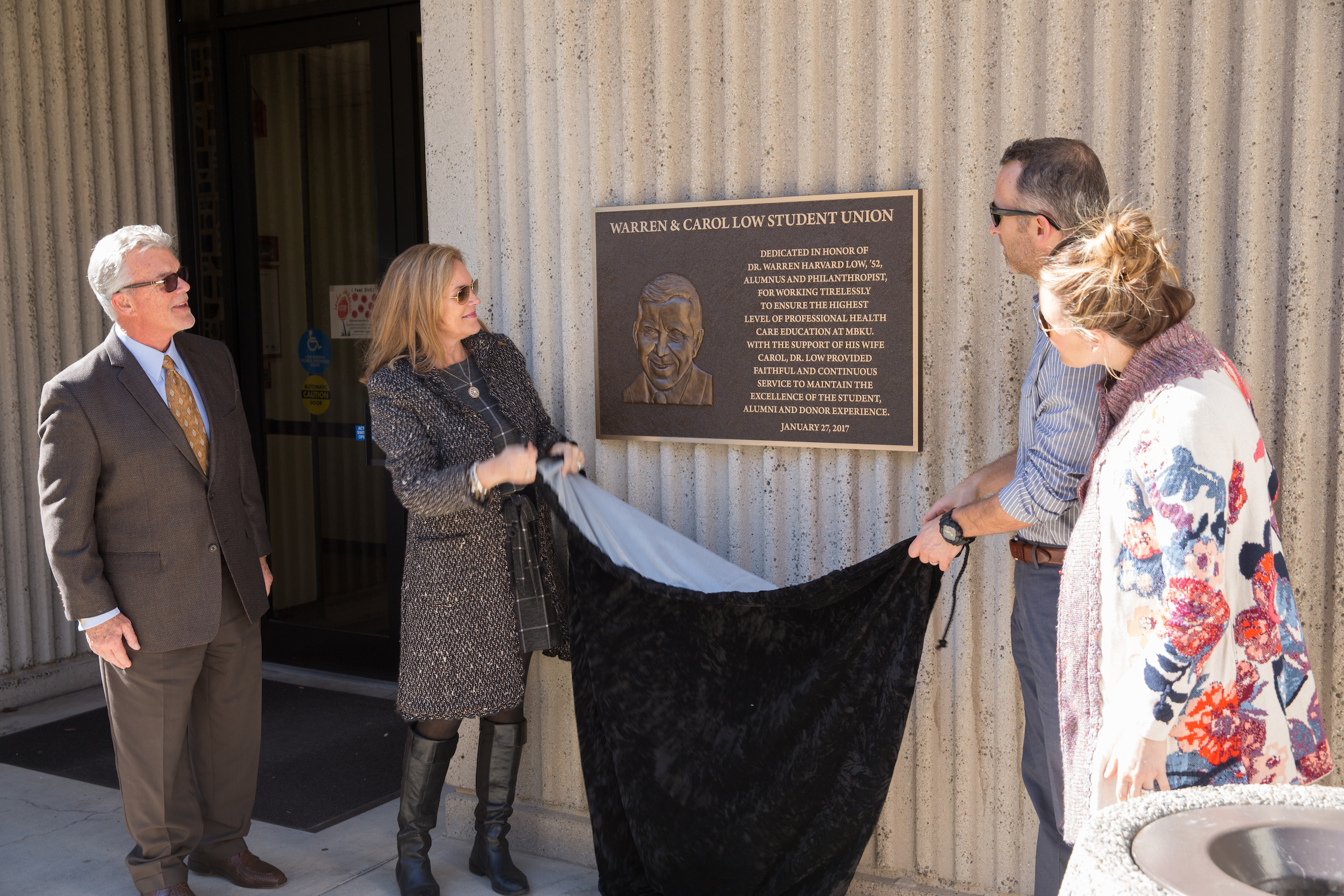 Champion for the student experience.

The legacy of Warren Harvard Low, OD, who passed away on December 28, 2015, and was the longest-serving member of Ketchum’s Board of Trustees, spanned more than 40 years and three institutional presidents. Instrumental in securing the university’s fiscal future, he will be remembered for his dedication and generosity, leaving a bequest of $2.7 million to cap his long-standing support of Marshall B. Ketchum University.

“We greatly appreciate Warren’s unflagging commitment to advancing the interests of not only SCCO and the university, but the profession of optometry as a whole,” said MBKU President Kevin L. Alexander, OD, PhD. “His generosity is a vote of confidence in Ketchum’s future, which he helped direct as a member of our Board of Trustees.”

Dr. Low’s gift endows a scholarship in his name, and the university has recognized his interest in students by formally naming the Warren & Carol Low Student Union.

“This fits his wishes perfectly since he most wanted to enrich student experiences,” said his wife, Carol Low.

Dr. Low graduated from the Los Angeles College of Optometry in 1952. He joined the SCCO Board of Trustees in 1970 and was part of the committee that helped the college move to Fullerton in 1973. He served actively on the Ketchum Board until months before his death, under presidents Richard L. Hopping, OD, DOS from 1973-1997, Lesley L. Walls, OD, MD, DOS from 1997-2008 and Kevin L. Alexander, OD, PhD, the university’s current president.

"As for longevity, he certainly was our longest member,” said Gene D. Calkins, OD, JD, a trustee since 1994. “He did that because he had a passion both for his profession and for the university.”

The optometry college Dr. Low helped bring to Fullerton more than 40 years ago was already well established, being one of the first OD-granting institutions in the country. The university’s namesake, Marshall Bidwell Ketchum, MD, moved to Los Angeles and founded the Los Angeles School of Ophthalmology and Optometry in 1904. Almost five decades later, Dr. Low would graduate and become an alumnus.

Throughout its evolution, Dr. Low kept a sharp eye on the university’s bottom line, recalls Dr. Calkins, who joined him on the board in 1994 when the 90-year-old institution was still a single-discipline optometry college. “SCCO was well recognized and the board had a lot of pride in its financial strength,” he said.

“The strength that Warren brought to the board—and that I know he concentrated on in his practice too—was the finances,” said Dr. Calkins. “He very much was interested in the college’s financial well-being. He supported that with his own money, and ultimately with the generous gift he gave in his will. He was very strong in monitoring that well-being and making sure that the college maintained its financial strength.”

Dr. Low’s business acumen was confirmed by Glenda Secor, OD, who served on the board with him for more than 20 years. “He was always watching where our money was spent,” she said. “Were we spending our money wisely? The budget for the university—were we investing it properly and were we getting the best return on our investment? He always had the financial well-being of the institution at heart.”

As the longest-serving member on the board, Dr. Low often provided a historical perspective on the issues, said Dr. Secor.

Looking for growth opportunities for the college, Dr. Low and the rest of the board had a desire to expand the place of the Southern California College of Optometry within the profession. This came to fruition under President Alexander’s leadership with the transition to interprofessional Ketchum University.

Today, the Southern California College of Optometry, the School of PA Studies and College of Pharmacy are partners in a challenging new approach to health care education, designed for and with the nation’s future primary care providers in mind. In order to meet the expectations being set by team-based models, Dr. Low fully supported President Alexander’s vision to reimagine health care education.

“The board members, including Dr. Low and myself, wholeheartedly supported President Alexander’s vision,” said Dr. Calkins. “And Warren was a big part of that from the beginning. He understood that the profession needed to evolve and become a little more involved in the medical model—to better integrate into mainstream medicine.”

With degree programs in three professions and clinical training taking place in a new team-based facility in Anaheim, the future for Ketchum University has never looked brighter as the university takes its place among 21st century health profession educational institutions.

private practitioner in Lomita, Dr. Low contributed to his local community as a member of the Chamber of Commerce and area governor of Toastmasters International. He was an ardent advocate for the profession, active in state and national associations. For many years he was a key person for the California Optometric Association, serving to educate lawmakers about issues important to optometry. “Optometry was his baby, and he loved our profession,” said Dr. Secor.

“The university’s plans for remembering Dr. Low are a good fit,” said Dr. Secor, “because of his feelings for students and his desire for them to love the profession as much as he did.”

“I think the student union is really a perfect reflection of his goals for where his contribution should ultimately be within the university structure,” she said. “He was always passionate about issues that would make the student experience better.”

“During Warren’s life as a professional optometrist, he saw us go from being eyeglass professionals to treating eye diseases,” said Dr. Secor. “Recent legislation has expanded our role among health care providers in a way that wasn’t available 60 years ago when Dr. Low became an optometrist,” she said.

“In his lifetime he saw the profession evolve exponentially — capabilities that weren’t even on the radar when he graduated,” said Dr. Secor. “It’s really exciting to imagine the future, based on both the SCCO students we see graduating and the models we’ve created for better patient care.”

Dr. Low was well-known for his passion for living. He also didn’t believe in retiring, practicing optometry until he was sidelined by a sports injury. An avid tennis player since his days at Stanford University, where he played competitively, Dr. Low fit a set into his schedule every day before going to the office. “He pursued all of his passions until the very end,” Dr. Calkins said.

As much as Dr. Low loved his profession, the university and tennis, there was one passion that surpassed them all. “All this would come after his wife, Carol, naturally,” said Dr. Calkins. “Carol was the love of his life.”

To learn more about leaving a gift through your will or trust, visit ketchumlegacy.org or call 714.463.7550.