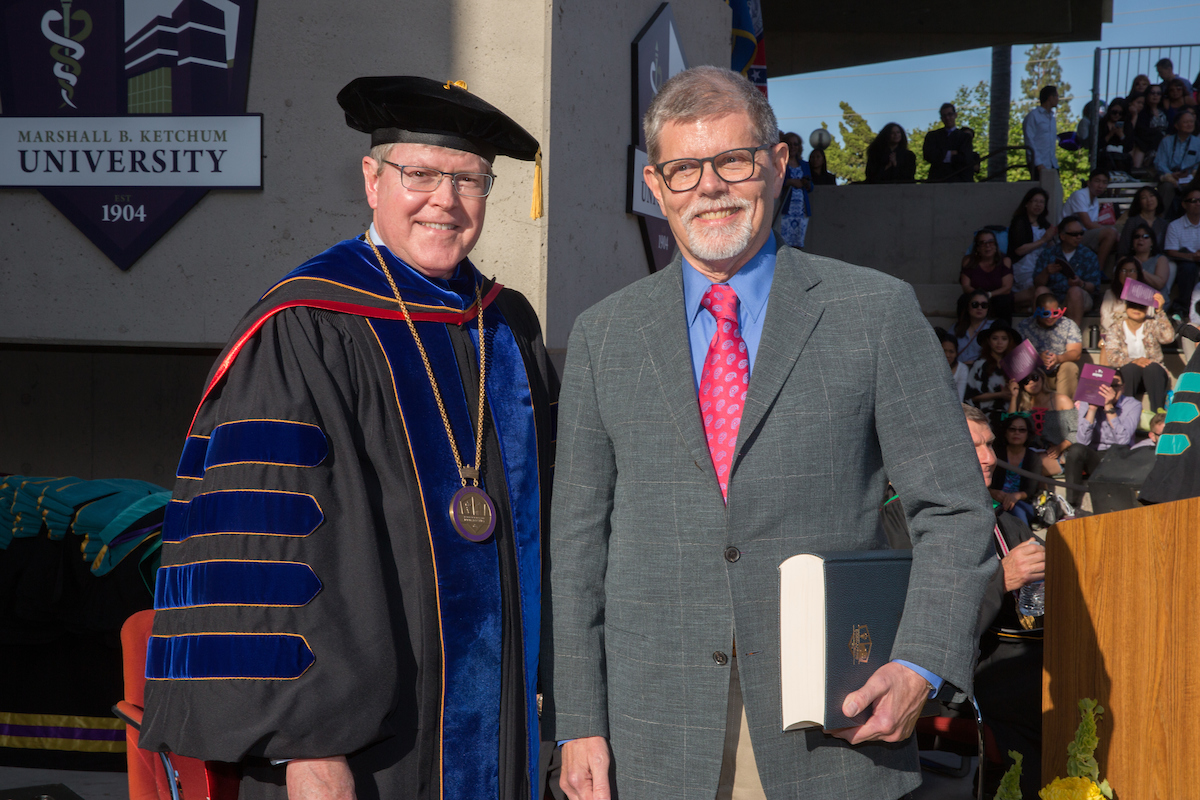 Southern California College of Optometry Professor Emeritus David C. Bright, OD, ’76, has been bestowed with many high honors during his lengthy career. Still, Dr. Bright says his greatest honors have been the opportunity to serve his patients and mentor his optometry students.

“I always wanted to be in health care. It is a caring profession,” says Dr. Bright in discussing how he chose optometry as a profession.

“And I would say the most rewarding parts of my career have been being with the patients, and being a mentor for the students,” added Dr. Bright. “They learn by listening, watching and doing.”

Dr. Bright was named Professor Emeritus at SCCO in May. He began teaching at the College in 1977 – just one year after he graduated – serving as clinical instructor in outreach clinics. Dr. Bright also enjoyed a long tenure of serving in the Department of Veterans Affairs, having worked at the Los Angeles Outpatient Clinic from 1978 to 1983 and at the West Los Angeles facility from 1990 until his retirement this year. Additionally, he served as Chief of Optometry Service for the Greater Los Angeles Healthcare System from 1996 until his retirement.

Dr. Bright says he put about 22,000 miles on his car during his first year of working as a clinical preceptor to trainees at three VA outreach clinics as well as SCCO’s Optometric Center of Fullerton, now known as the University Eye Center at Ketchum Health in Anaheim Hills. This was the very beginning of the College’s relationship with the VA clinics – a relationship Dr. Bright says has “grown and grown” in the subsequent decades.

Over the more than 30 years of partnership with SCCO, the VA has allowed trainees to experience various iterations of interprofessional care, that, according to Dr. Bright, vary from facility to facility. Optometry, he says, is frequently involved with the health care team at the VA. In many facilities, optometry is within the department of surgery, while at others its organizational relationship is with primary care. Today, SCCO affiliates with nearly ten VA clinics and about 65 SCCO students are assigned to VA clinics each year.

“Post graduate residents put their best foot forward for optometry when they are working with ophthalmology and other disciplines, both primary care and numerous specialties,” says Dr. Bright. “They are the ones who are interfacing significantly with the other providers.”

Dr. Bright also has published extensively and has been granted the “Eagle Award” from the editor of the Journal of the American Optometric Association three separate times for the best article submitted by a VA optometrist. He has contributed to three optometric textbooks and lectures nationally and internationally in the areas of ocular pharmacology, ocular disease, dermatology and HIV/AIDS. He also served on the editorial board of Clinical Eye and Vision Care from 1993 to 2000, and served as a reviewer for the Journal of the American Optometric Association and Optometry and Visual Science.

He has worked as a clinical instructor as well as a professor at SCCO, teaching courses ranging from ocular pharmacology to courses in the geriatric and public health tracks. He was awarded Teacher of the Year seven times at SCCO.

Dr. Bright became a Fellow of the American Academy of Optometry in 1979 and is a member of the Ocular Disease Section of the AAO, the COA, the AOA and the National Association of VA Optometrists.

Since he began his career in the mid-1970’s, Dr. Bright says he has seen many changes in the profession. One such change is that the scope of services optometrists now provide has expanded immensely.

“Electronic health records allow the interprofessional work,” says Dr. Bright. “We can see what is done elsewhere. We have immediate access to lab results … all that information at our fingertips is just a godsend.”

Dr. Bright is enjoying his retirement at present and will possibly teach a continuing education course next year.

At this juncture in his life, he remains grateful for his multi-faceted career, and the people who helped him along the way.

“People had enough confidence in me to let me grow and expand,” he says. “Their extreme kindness and generosity is something I will always be grateful for.”