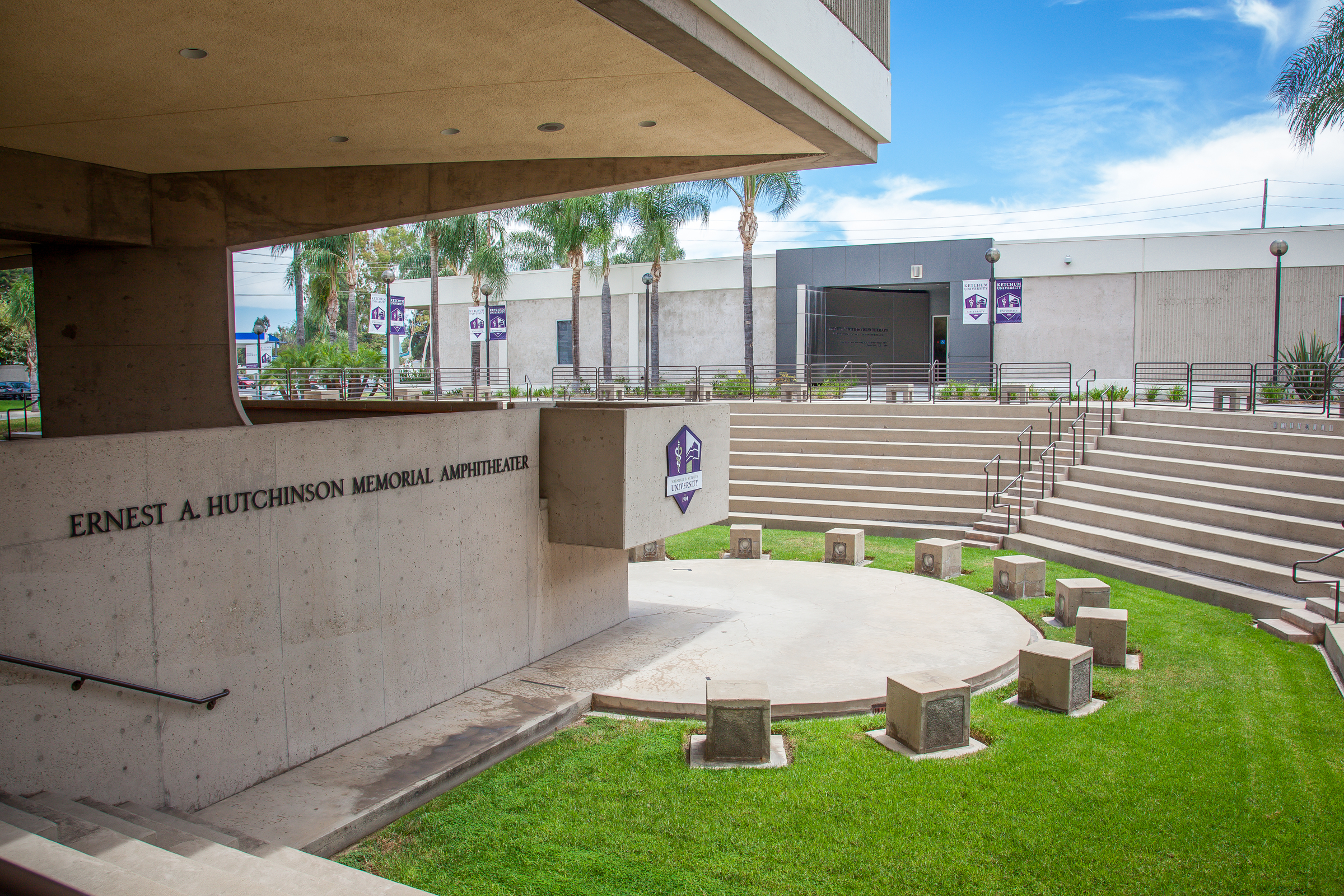 He was just 6 years old, and Christos McClain got his first pair of glasses. When he showed up to elementary school one day without those glasses, he received a valuable lesson about how dependent he was on his vision. That early memory of frustration led Christos to pursue a career in optometry.

After graduating from Texas A&M University, Christos began working for a local optometrist, Dr. Matthew Greene, in College Station, Texas. Dr. Greene quickly became a mentor to Christos, teaching him about the optometry field and welcoming him into his private practice. “More than anything,” Christos said, “I respect Dr. Greene because he advocates for his patient’s best interest. He is continually developing his own professional abilities and learning new technologies in order to best serve his patients.”

That passion for ongoing education and professional development is something that drew Christos to Ketchum University. Opening Ketchum Health last year, the school has created an expansive and state-of-the-art clinic for students to gain relevant hands-on training under the mentorship of SCCO’s world-class faculty. “Walking into the clinic on that first day, I was totally impressed with how Ketchum continually tries to improve the educational environment for its students — creating new opportunities to interact with patients and learn from first-hand experiences,” he said. “Even though SCCO has been around for over 100 years, they’re not dated … if anything, they’re pushing the boundaries in optometry as a leader in the field.”

Christos has seen the role Ketchum University plays in the much bigger world of optometry by attending some of the American Academy of Optometry conferences. At a conference earlier this year he watched as one of his own professors, Catherine Heyman, OD, present a lecture to a room packed with other optometrists. “It’s pretty amazing to see the professor who is teaching you — actually give a lecture to a room full of other doctors in the field,” he said. “I realized then that Ketchum was a great collection of thinkers, leaders and innovators … not just on our small campus but within the entire industry.”

In addition to his optometry studies, Christos has been equally impressed with the interprofessional courses at MKBU. “By learning what the PAs and pharmacists do — it allows us to all learn together and not just operate in a silo,” he said. “When we work together, we’re able to collectively treat the whole patient with a better combined outcome.”

With his clinical rotations just a year away, Christos is looking to expand his horizons, literally. He is exploring options to work in a different state, potentially as far away as Alaska. Christos is excited to experience a new community and also suspects that one day his path may lead him back to Dr. Greene’s practice and his happy memories in College Station.

But for now he’s happy to be living and learning in California at Ketchum University, the premier optometry school in the country with a clear vision for the future.

Finding a home away from home

In making the move from her home state of Florida to join the School of PA Studies, Shelby Stinson was leaving a lot behind. However, once she interviewed and toured the Ketchum University campus, she knew “this was where I had to be.”

With a warm and welcoming staff and just 43 students in her class, she instantly felt she had the support system to make the huge life change. “Being from out of state, the faculty really has helped me through the transition process,” she said. “I always feel like they want me to grow … not just as a student, but as a person as well. Ketchum is a truly unique place for that reason alone.”

After completing her year of didactic studies, Shelby and her classmates will begin their PA clinical rotations. “The PA profession is so new to health care, it’s growing and changing from year to year and Ketchum is really a leader in the field.”

Shelby was drawn to the health care field because she enjoys the challenge of piecing together all the intricate details about her patient in order to solve a problem. “It’s extremely rewarding to figure out what’s wrong with a patient and help guide them towards a treatment that will improve their overall health and happiness,” she said. In her studies and experiences at Ketchum University, Shelby has learned that in order to fix the problem — you first have to treat the person with compassion, understanding and respect.

Over the last two years, she has interacted with a lot of professors and health care providers Shelby would characterize as “heroes.” But her leading hero is one closer to home. “My dad is a registered nurse and was my biggest supporter in coming to Ketchum to fulfill my dream of becoming a PA,” she said. “He’s worked for more than 20 years as a traveling nurse and really opened my eyes to the opportunities that were out there. I definitely wouldn’t have made it this far without him.”

With her acceptance into the School of PA Studies, Shelby and her dad packed up her car and headed west. Their road trip took them through a dozen states and a quick side trip to the Grand Canyon. Shelby is looking to use those experiences — meeting new people and exploring new places — as she looks ahead to her clinical rotations.

“I can’t wait to actually get there and do what I’ve been studying these last six months,” she said. Whether providing health screenings to underserved communities or offering educational information at the Boys and Girls Club, Shelby says Ketchum has encouraged her to get out of her comfort zone. She credits the program with giving her a greater self-confidence and improved communication skills in dealing with patients.

Shelby is looking to follow in her dad’s footsteps in patient care. “I care about my patients and want to give them the highest quality care possible … which is something my dad has always taught me.”

Making a mark in a growing community

As part of Ketchum University's College of Pharmacy inaugural class, Andrew Kaewtavorn knew he wanted to make a mark. Elected as class president, he is looking to help the program grow, develop and expand in the years ahead.

The son of a nurse, Andrew has always been drawn to the medical profession. “I knew pharmacy was an area I wanted to explore — and Ketchum is the best place in the country to do that.” Andrew graduated from California State University at Fullerton in 2012 and spent a few years as a pharmacy technician, getting real-world experience before applying to Ketchum University in 2017. Practical application is something the College of Pharmacy looks for in successful applicants. Andrew was one of 43 selected for the four-year pharmacy program.

Quite a departure from a large state school like Fullerton, Andrew is amazed how much the small class size at Ketchum positively impacts the academic experience. The professor-to-student ratio creates a greater sense of community and comradery between faculty and staff.

Andrew describes one of his teachers, Jozef Stec, PhD, as a person he admires not only for Dr. Stec’s approach to science but also for the way he applies that outlook to his students and life. “His energy literally lights up the room … and dare I say, he actually makes organic chemistry enjoyable.” No small feat.

Andrew was initially drawn to the field of pharmacy because it combined two passions — working with people and using his communication skills to help patients; something he first experienced watching his mom throughout her career. “I would definitely say my mom is one of my heroes in health care because I see her passion for what she does. She creates lifelong relationships with her patients by giving them the highest quality of care,” he said. “She literally brings life into the world every day, as a labor and delivery nurse, and I can tell it’s not just a job for her — it’s what she loves to do.”

Andrew knows his mom will be overjoyed to see him walk across the stage in 2020 — the first in his family to graduate from a professional school.

Looking to the future, Andrew is excited to see what the next few years bring. In his third year he will start his clinical rotations in a hospital pharmacy, on a reservation for Native Americans or working at a local retail location — Ketchum encourages students to expand their horizons with rotations they wouldn’t normally try.

“Pharmacy is an ever-evolving field in health care and Ketchum is pushing us to be the most well-rounded, polished pharmacy students and practitioners we can be,” Andrew said. “This is an incredible time to be in pharmacy school … I can’t wait to see what comes next for my class, our University and the advancement of our field as a whole.”