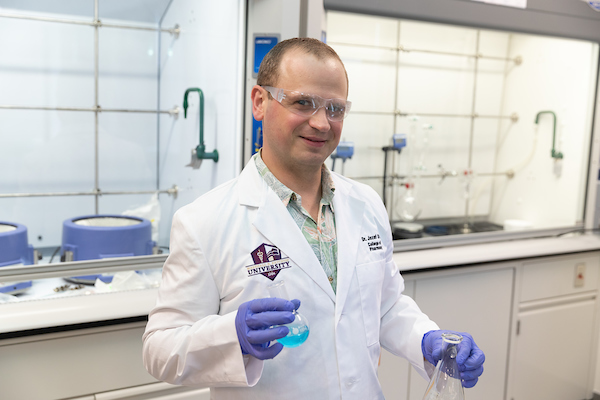 Marshall B. Ketchum University is pleased to announce that Dr. Jozef Stec, Professor of Pharmaceutical Sciences in the College of Pharmacy, along with his colleague and research partner, Dr. William Witola, Associate Professor of Veterinary Parasitology at the University of Illinois at Urbana-Champaign, have been awarded nearly $800,000 in a research grant from the United States Department of Agriculture. The federal grant will fund the scientific collaboration between Dr. Stec’s and Dr. Witola’s respective laboratories to support and advance biomedical research aimed at discovering and developing new medicines to combat parasitic diseases such as toxoplasmosis and cryptosporidiosis. The burden these diseases represent in the United States and around the world on health care systems as well as farming and agriculture is profound, and Dr. Stec’s and Dr. Witola’s work has a potentially lasting impact on how the diseases are treated.

This type of opportunity is precisely what Dr. Stec signed up for when he first discovered how pharmaceutical research could marry his passion for scientific knowledge, skills, and mentoring new generations of scholars with his lifetime goals of making meaningful contributions to humankind. He was first inspired by his Master’s thesis advisor while studying in his native Poland, where he had a front-row seat to his advisor’s brilliant work in inventing, discovering, and developing new molecules that could be converted into medicines in the field of anti-cancer agents. Dr. Stec was exposed to a glamorous side of scientific research, there as a young student with a star researcher as mentor, on the border of chemistry, drug development, and health care.

But Dr. Stec also had a much more personal influence: “In early 2000, my sister was diagnosed with leukemia,” he explains. “And as I was studying chemistry at the time, I began to research more about the disease, trying to find out more about how leukemia is treated, the different approaches and the various kinds of leukemia. So, the professional and the personal aspects are the two factors that have directed me towards where I am now.” This deeper sense of purpose still animates and inspires Dr. Stec’s current work in the area of infectious diseases.

The best family dynamics have as a core characteristic a rapport that renews instantly even after some time apart. And so it was with Dr. Stec and Dr. Witola, who a number of years ago were both post-doctoral fellows working under principal investigators at different universities in the greater Chicago area. Their respective PIs were collaborating on a project, so Dr. Stec and Dr. Witola got to know each other well, before embarking on their separate academic careers. Years later, they came across each other’s scientific work again.

Dr. Stec saw Dr. Witola’s name on a paper his old friend had published as a principal investigator at UIUC on parasitology and realized the library of chemical compounds he had been developing as a researcher at MBKU might be useful. He picked up the phone, their great rapport was reestablished, and even more importantly, a potentially world-changing collaboration was begun.

This collaboration focuses specifically on tropical diseases such as toxoplasmosis and cryptosporidiosis, which are often neglected because they happen to be a huge problem in the developing world. These parasitic diseases are zoonotic, meaning they spread between animals and people, and though they are not as lethal as malaria, they are more prevalent, as is the case with toxoplasmosis, or pose a significant threat to immunocompromised individuals, children, and bovine calves, as is the case with cryptosporidiosis. The grant brings together two experts who are able to tackle the problem by bringing their different skillsets to bear on it.

“This perfectly represents the power of collaboration,” says Dr. Stec. “It grew from a good relationship with complementary areas of expertise. My students and I design compounds, which we then synthesize into actual small chemical molecules. Our group then purifies them, and sends them to Dr. Witola, who prepares the appropriate concentration of the compounds and sets up the appropriate testing models for the two disease states. If the compounds show promise in inhibiting the parasite growth, we move on to animal models, with the eventual goal of developing, approving, and marketing a new treatment. And again, I believe the complementary expertise and our great professional relationship really advances the scientific results – which leads to a flourishing collaboration!”