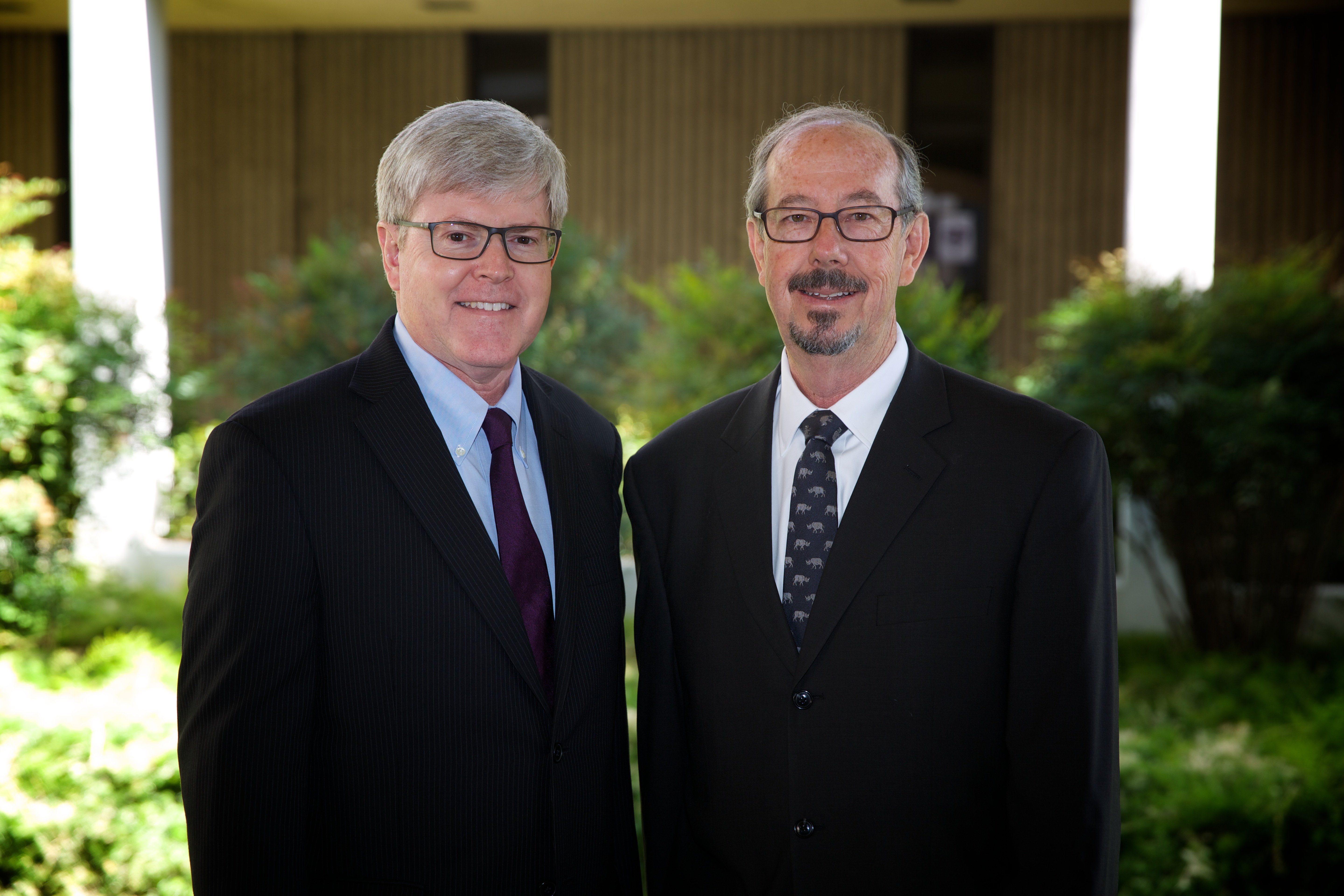 Marshall B. Ketchum University has named Morris S. Berman, O.D., M.S., (right), its first University Provost.  Dr. Berman is pictured with MBKU President Kevin L. Alexander, O.D., Ph.D., who made the June 3 announcement.
Morris S. Berman, O.D., M.S., has been named the first University Provost for Marshall B. Ketchum University (MBKU), as announced by University President Kevin L. Alexander, O.D., Ph.D., on June 3.  As the 110-year-old University transitions from a single- to a multi-disciplinary health education institution the addition of a Provost is essential.

"In his role as University Provost, Dr. Berman will be responsible for the academic quality of all university programs and will assist other administrators in establishing the annual budget," said Dr. Alexander.  "The Deans of Optometry, Pharmacy and Health Sciences will report to the University Provost.  Directors of other campus-wide services such as Information Technology, Operations and the Library Service will also report to the Provost."

For the past year, Dr. Berman has served the developing university in the role of Senior Vice President taking on institutional research and outcomes assessment, professional and regional accreditation, and special projects for the President's Office.

Prior to this appointment in 2013, Dr. Berman served 28 years as Vice President and Dean of Academic Affairs at the Southern California College of Optometry, now one of three programs at Marshall B. Ketchum University.

Before joining SCCO in 1985, he was the Assistant Dean for Education at the Illinois College of Optometry in Chicago, and also served as a faculty member at the University of Houston College of Optometry.  A second-generation optometrist, Dr. Berman completed his optometric training in Johannesburg, South Africa in 1967.  He completed a residency program at the Optometric Center of New York in 1968 and earned the degrees Doctor of Optometry (O.D.) and Master of Science in Physiological Optics (M.S.) at the University of Houston College of Optometry.  He has taught strabismus/amblyopia, electro-diagnosis, and ocular physiology; recently his teaching has included a course in Professional Ethics at SCCO.

Dr. Berman has published over 30 papers on clinical topics and co-authored the Dictionary of Visual Sciences and Related Clinical Terms.  Dr. Berman is a Fellow of the American Academy of Optometry and Chaired its Education Program Committee (formerly Ellerbrock Memorial CE Committee) in 2001–02.  He has served as the Chair, Academic Affairs Committee of the Association of Schools and Colleges of Optometry (ASCO), and as editor of its bi-monthly publication Eye on Education.  Dr. Berman also chaired a national conference on the Optometry Curriculum Model in 1992, which formed part of the Summit in Optometric Education series.

Vision:  To reimagine the future of health care education.

History
Marshall B. Ketchum University is now home to the Southern California College of Optometry and the School of Physician Assistant Studies.  Named after the founder of the optometric institution in 1904, the change to a university structure addresses the growing demand for highly skilled health care professionals.  MBKU will provide a diversity of health care education opportunities in an environment fully focused on medical professionalism, combining advanced clinical training with innovative teaching methods.  The University confers a four-year, professional degree, Doctor of Optometry (O.D.) and a Master of Science in Vision Science (M.S.) degree.  MBKU's School of Physician Assistant Studies expects to award a Master of Medical Sciences (MMS) degree.  MBKU has recently announced plans to establish a College of Pharmacy.