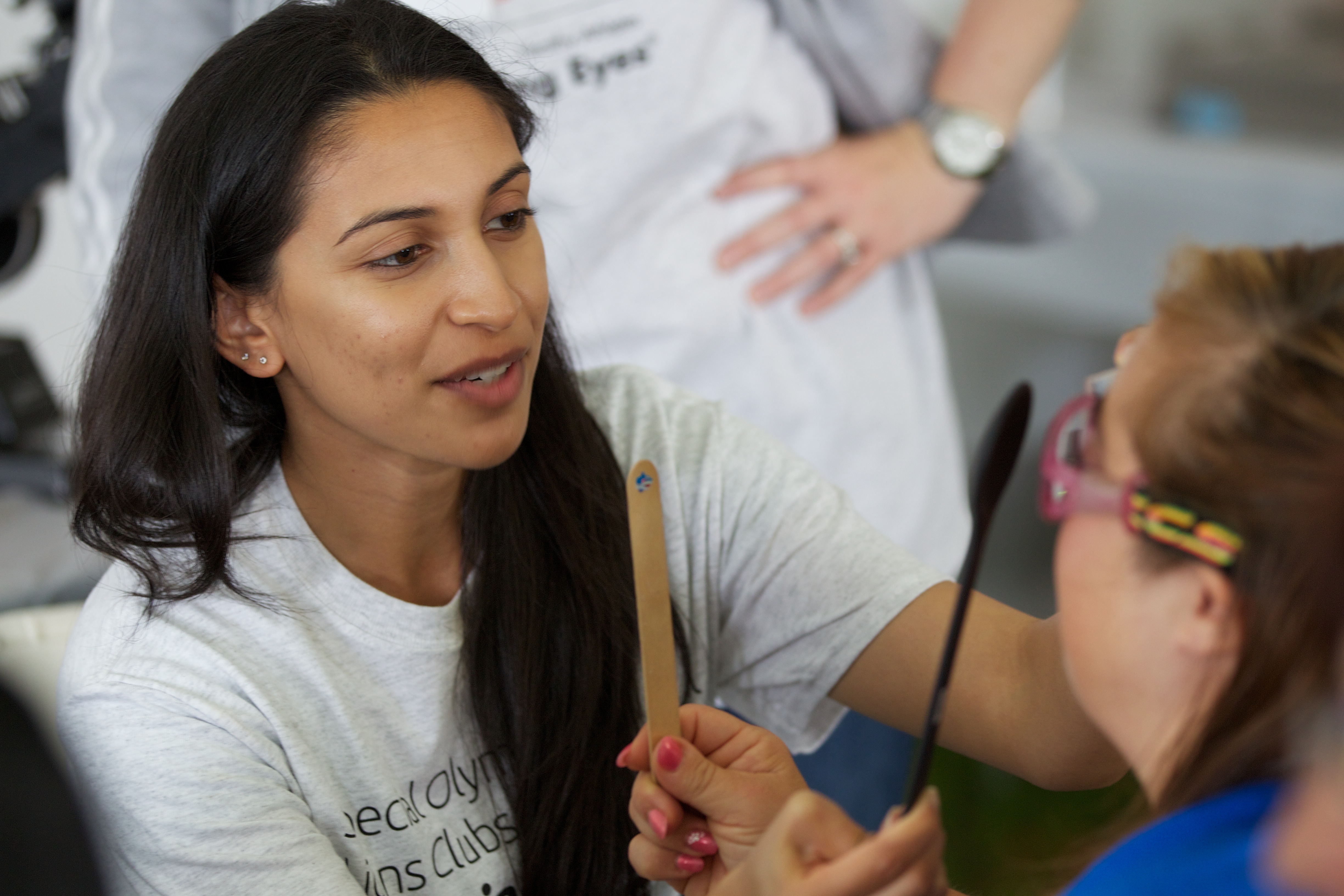 Vision care will be provided by alumni of the Southern California College of Optometry (SCCO), to athletes at the Special Olympics World Games in PyeongChang, South Korea, January 29 – February 5.  SCCO Assistant Professor Eunice Myung Lee, O.D., Class of 1999 and Wisconsin Optometrist Kellye J. Knueppel, O.D., Class of 1993, will be part of the team providing vision and eye care to the 2,000 participating athletes.

Lions Clubs International Opening Eyes who are alumni of your institution," said Dr. Berman.  "That is one of the reasons why we are so excited that the 2015 World Games will be in Southern California to highlight the support of the college, its faculty, students and alumni."

"I volunteered at the very first Special Olympics vision screening in Southern California when I was an optometry student and was 'hooked.'  I think I've missed only one screening since then," said Dr. Myung Lee.  "Not only was it an incredible opportunity to give back to the community using my specific training, but when I work with Special Olympics I gain so much more.  The enthusiasm and joy of the athletes is infectious and often the immediate ability to see better by the athlete results in smiles and hugs all around.  Now I get to see the same thing happen as I work with SCCO students and staff, many of whom also volunteer year after year.  And, it means more optometrists are out there every year who feel more comfortable providing services in their own practices to patients with intellectual disabilities."

In Wisconsin, Dr. Knueppel has served for many years as the Clinical Director for that state's Special Olympics Lions Clubs International Opening Eyes Program and has participated at several state and world-game events.  In addition, she's currently serving as president of the Wisconsin Optometric Association.

At the Healthy Athletes Village free health screenings are made available to keep athletes prepared for their training and competition.  In addition to vision screenings, volunteer healthcare professionals and students provide screenings in the areas of podiatry, hearing, dental, dietary and fitness.

About the Southern California College of Optometry
Established in 1904, SCCO is a private, non-profit, educational institution dedicated to educating today's minds to provide tomorrow's eye, vision and health care.  SCCO grants a four-year, professional degree, Doctor of Optometry (OD) and a Master of Science in Vision Science (MS).  The College announced, in August 2011, its plan to start a two-year Master's level Physician Assistant program.  It is anticipated that the first Physician Assistant classes will begin in the Fall of 2014, pending provisional accreditation.  This is the College's first step in the development of an interprofessional healthcare campus.

A special component of SCCO's educational program is community service.  Annually, SCCO faculty and optometric interns provide eye and vision care to thousands of uninsured or underinsured children and adults in our local communities through collaborations with other nonprofit organizations.

About Special Olympics
Every two years, thousands of Special Olympics athletes worldwide come together to showcase their athletic skills and celebrate the spirit of Special Olympics.  The first Special Olympic World Games took place in 1968 and since then have evolved into a world-class sporting event attracting a wide range of sponsors, supporters and media.  The 2013 Games will be the tenth Special Olympics World Winter Games and one of the largest winter multi-sport events ever held in South Korea.  The Games will feature world-class competition in alpine skiing, cross-country skiing, figure skating, snowboarding and speed skating, among other sports.