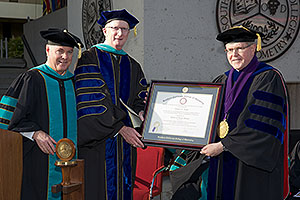 The honorary degree, Doctor of Ocular Science was conferred upon, the President of Salus University Thomas L. Lewis, O.D., Ph.D., for his visionary leadership in optometric education, at the 109th Commencement Exercise of the Southern California College of Optometry at Marshall B. Ketchum University.   Dr. Lewis was honored before the 99 members of the Class of 2013, faculty and friends at the May 23 event.

"Dr. Lewis is a visionary leader in optometric education.  Arguably, his most notable career accomplishment is the founding of Salus University in 2008 building from the legacy of the Pennsylvania College of Optometry," said SCCO President Kevin L. Alexander, O.D., Ph.D.

"In a few years, Salus has grown into an interdisciplinary healthcare campus of over 1800 students with five colleges encompassing 16 programs."

As a leader within the profession, Dr. Lewis came at optometric education from a non-traditional path.  After completing his Doctor of Optometry degree at the Pennsylvania College of Optometry (PCO) in 1970, he enrolled in the Ph.D. program at the Daniel Baugh Institute of Anatomy at the Jefferson Medical College in Philadelphia, completing his degree in 1974.

Joining the PCO faculty in 1972, Dr. Lewis rose through the faculty ranks achieving the rank of Professor of Anatomy and Ocular Biology.  He has served PCO as Director of the Division of Biological Sciences, Chief of Professional Staff of The Eye Institute, Dean of Academic Affairs, and was appointed PCO President in 1989.  Following the establishment of Salus University in 2008, Dr. Lewis became its first President.

Dr. Lewis has contributed to the literature with over 30 publications, numerous invited presentations and countless continuing education programs.  He has testified before countless state legislatures on behalf of diagnostic and therapeutic privileges for optometry.

His service to the profession includes: Past President, American Academy of Optometry, Association of Schools and Colleges of Optometry, National Board of Examiners in Optometry and the Partnership Foundation.  He serves on numerous boards including the American Board of Optometry.

Dr. Lewis has received many awards and recognitions.  Among the most notable are: President’s Award, the Prentice Society; the Otsuka Glaucoma Educator of the Year, American Academy of Optometry; the Eminent Service Award, American Academy of Optometry; the Distinguished Service Award, Optometric Glaucoma Society; and Inductee, the National Optometry Hall of Fame.

Dr. Lewis formally retired in 2012; however, has continued as Salus President until the new President, Admiral Michael Mittelman, O.D., begins in July 2013.