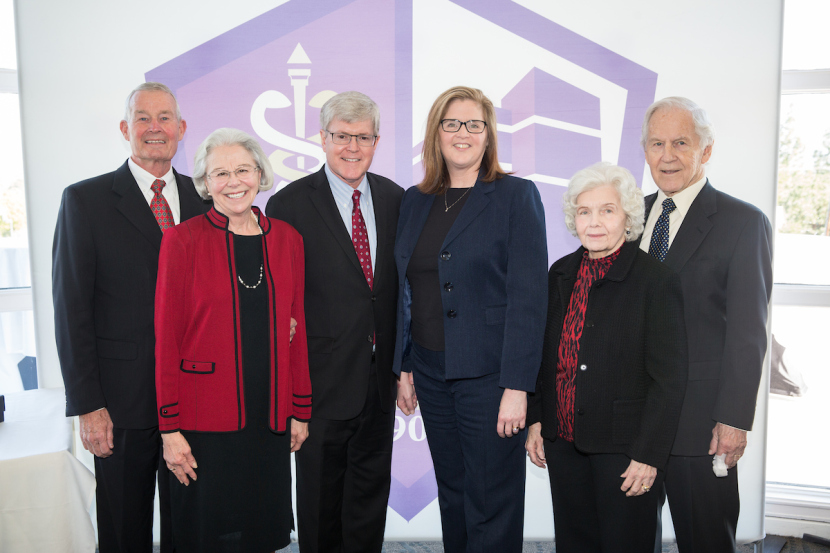 On Friday, Jan. 27, 2017, University leadership and alumni gathered for the seventh annual Circle of Vision luncheon at the Summit House restaurant in Fullerton, to celebrate and recognize members of the MBKU community that have made a significant impact in shaping the University

The first award honored Dr. Donald E. Studt who graduated from the Los Angeles College of Optometry in 1951, following in the footsteps of his father and alumnus, Walter Studt who graduated in 1919. He is the co-founder of The Studt Foundation and has been a loyal supporter of MBKU for decades in a variety of areas including the library program, capital fund and special events. He is the distinguished benefactor for the Studt Center for Vision Therapy at the University Eye Center at Ketchum Health.

The second award honored Drs. Lesley and Mary Ann Keverline Walls. Dr. Lesley L. Walls became the sixth president of the Southern California College of Optometry, where he served from 1997-2008. Prior to that time, he had been involved in medical and optometric education for more than 20 years. Dr. Lesley Walls has an annual endowed award in his name, established as tribute to his legacy and love of teaching, and presented annually to a graduating MBKU student with the highest cumulative GPA.

The third Circle of Vision award for distinguished philanthropy honored Dr. Allen & Mrs. Marilyn Souchek. Dr. Souchek graduated from Los Angeles College of Optometry in 1970 where he met his wife, Marilyn, when she went for an eye exam and vision therapy. Dr. Souckek practiced optometry for 30 years in both private practice and at Kaiser Permanente. Together, Dr. Allen and Marilyn Souchek have contributed in support of advancing the development of a sports vision program at SCCO. In recognition of the couple’s lifetime support, the Soucheks will place their name on the “Allen W. & Marilyn Souchek Atrium” at Ketchum Health.

“It was an honor to recognize each award recipient for their continuing support and leadership among our many generous donors,” said President Alexander. “Like most non-profits, Ketchum University relies on the generosity of alumni and friends that support the institution’s vision and mission. This support has been instrumental in our growth and ability to offer unmatched academic opportunities, exceptional clinical training and a purposeful effort to educate students in a team-based environment,” concluded Alexander.